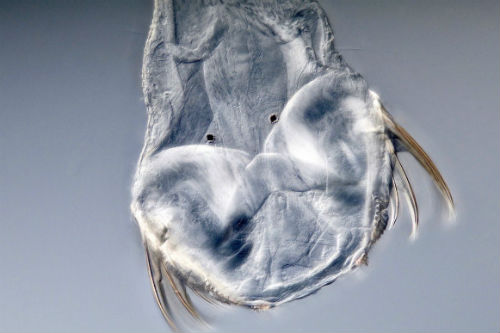 The head of the arrow worm, Parasagitta elegans. This group of animals are the closest living relatives to Amiskwia Rafael Martin Ledo/Consejería de Educación de Cantabría 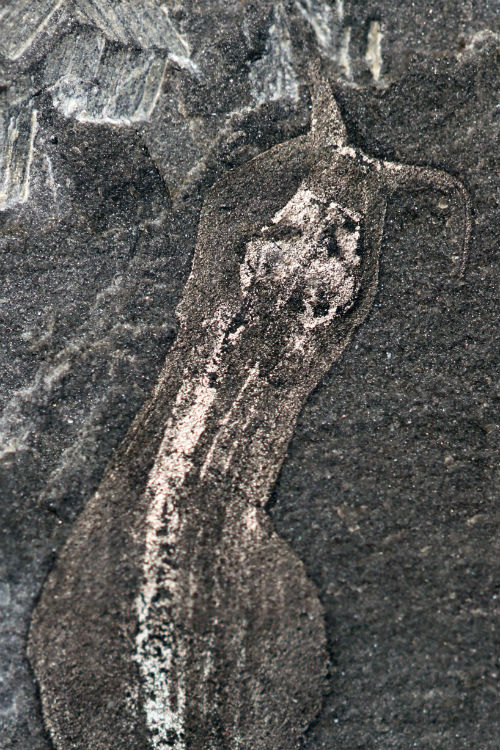 The fossil, Amiskwia sagittiformis from the Burgess Shale (508 million years old), preserving bilateral jaw elements inside its head. These jaw elements resemble those seen in rotifers and gnathostomulids, while the body resemble arrow worms Luke Alexander Parry/University of Bristol—Yale University 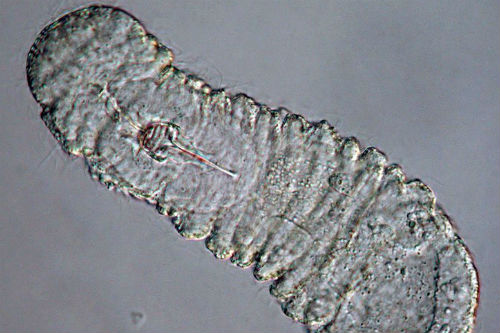 The gnathostomulid Rastrognathia macrostoma, these microscopic animals have a jaw apparatus similar to Amiskwia, which the scientists of this study now propose are among the closest living relatives of living arrow worms. Amiskwia proves to be the fossil link between these groups of animals Martin Vinther Sørensen/SNM Denmark

Palaeobiologists from the University of Bristol have shed new light on a jaw-snapping species of prehistoric worm using half-a-billion-year-old fossils kept at the Smithsonian Institute in Washington DC.

Amiskwia was originally described by the famous palaeontologist Charles Doolittle Walcott (1850-1927) in 1911 who compared it to the modern arrow worms (chaetognaths) – a group of ocean-dwelling worms that are fierce predators, equipped with an array of spines on their head for grasping small prey.

Such organisms are found world-wide at sites like the famous Burgess Shale in the Canadian Rockies, where their soft bodies are preserved intact.

The strange anatomies exhibited by these animals led the American palaeontologist Stephen Jay Gould (1941-2002) to speculate that these organisms represented extinct body plans that are no longer seen today and that if we were to wind back the clocks to the Cambrian, more than 500-million-years-ago, and re-run the tape of life, then perhaps the animals alive today would look very different.

More than 50 years after Doolittle Walcott came up with his theory about Amiskwia, scientists investigated its affinities and rejected his interpretation as they could not find evidence of the canonical grasping spines.

Instead, they suggested it could be a ribbon worm, or its own distinct lineage only distantly related to anything that resembles it today.

When Dr Jakob Vinther from the University of Bristol’s Schools of Earth Sciences and Biological Sciences and Luke Parry, now at Yale University, studied specimens of Amiskwia, kept at the Smithsonian Institution they found something that had been missed before.

Dr Vinther said: “I coated the specimen with ammonium chloride smoke to make the relief of the fossil stand out and then I could see that in the head was a pair of robust elements.”

Interpreting these structures as a set of jaws, their resemblance led him to think of a group of animals, called gnathiferans, which include rotifers, gnathostomulids and micrognathozoans. These animals are microscopic worms, with a distinctive internal jaw apparatus.

The scientists realised that Amiskwia suddenly had a jaw of a gnathiferan, but a body of an arrow worm.

Dr Vinther said: “The bizarre combination of anatomy seemed altogether alien back in 2012.

“Some people have proposed that there could be a relationship between arrow worms and gnathiferans based on their shared possession of a jaw apparatus, both made of a substance called chitin.

“However, there was little other evidence to suggest a relationship, such as evidence from phylogenetic analyses of DNA.”

Luke Parry added: “It altogether seemed like heresy to propose that gnathiferans and arrow worms may be related back then so we held off publishing our intriguing results out of fear of criticism from our peers.

“However, new DNA studies have since emerged that found arrow worms to be more and more closely affiliated to the Gnathifera in the Tree of Life.

“In particular, some researchers found that arrow worms share a duplication of the important Hox genes with a gnathiferan, the rotifers. We suddenly felt no more in a deadlock situation.”

Now the authors have published their findings in the journal Current Biology. The study follows a new phylogenetic study, which finds robust support for arrow worms forming an evolutionary group with gnathiferans.

Luke Parry said: “We were excited to see that these researchers found a relationship between arrow worms and rotifers.

“Our phylogenetic analysis, based on anatomical features, strongly suggest a relationship between these two groups of animals as well.”

The researchers find that Amiskwia is a stem lineage to arrow worms that possess the jaw apparatus seen in gnathiferan worms.

This jaw evolved into the fearsome grasping spines in living arrow worms, which now is an important link in the marine food chain. Small crustacean larvae have evolved long protective spines to protect themselves from being swallowed by arrow worms.

‘Bilateral jaw elements in Amiskwia sagittiformis bridge the morphological gap between gnathiferans and chaetognaths’ by L. Parry and J. Vinther in Current Biology