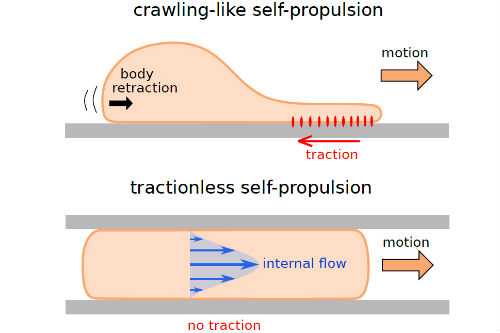 Crawling is a well-known mechanism for motion on surfaces, but it is ineffective for fast migration in tissues, where cells have to squeeze through tiny gaps. In contrast, tractionless self-propulsion is very suited for that purpose. A. Loisy, J. Eggers, and T. Liverpool, University of Bristol

In an article published in Physical Review Letters, Bristol scientists have answered the fundamental question: “Is it possible to move without exerting force on the environment?”, by describing the tractionless self-propulsion of active matter.

Understanding how cells move autonomously is a fundamental question for both biologists and physicists.

Experiments on cell motility are commonly done by looking at the motion of a cell on a glass slide under a microscope.

In those conditions, cells are observed to “crawl” on the surface. Crawling is well-understood: cells attach themselves to the surface and use these anchor points to push themselves forward (like crawling on the ground). However, crawling is very inefficient in vivo, where cells move through complex 3D environments.

Scientists from the School of Mathematics at Bristol have identified a different propulsion mechanism particularly suited for cell motion in tissues – one that doesn’t rely on force transmission through anchor points.

They found that self-propulsion without traction (=local force on the surrounding environment) is possible if you are made of “active” matter, as cells are. They describe how a drop of active matter can move itself forward in a narrow channel without exerting any force on the walls around it.

Lead author, Dr Aurore Loisy, said: “Tractionless motion is very counterintuitive. We became really excited when we realised that not only it is possible, but also that it provides a plausible explanation to a problem as important as cell motility in tissues.

“Besides, part of the beauty of this tractionless self-propulsion lies in the fact that it is described by an analytical solution of remarkable and unusual simplicity. Due to the complexity (nonlinearity) of the equations that describe active matter, we did not expect to end up with something so simple!”

Active matter is a special kind of matter, ubiquitous in biology, in which metabolic energy is constantly converted into mechanical energy. This ability to generate mechanical forces internally, in the bulk, is what allows the drop to move without exerting forces at its boundaries (the walls).

Dr Loisy added: “A drop of active matter moving through tiny gaps is a minimal model to understand cell motility in tissues, which are crowded environments with intricate geometries.

“The mechanism we discovered provides a possible explanation to the open question of how cells move in those environments. Such motility is crucial to a multitude of physiological processes in living organisms, including immune response and wound healing, and its deregulation is key to cancer dissemination (metastasis).”

The next step is to observe this phenomenon experimentally, using a drop of cell extracts in a specifically engineered microchannel.