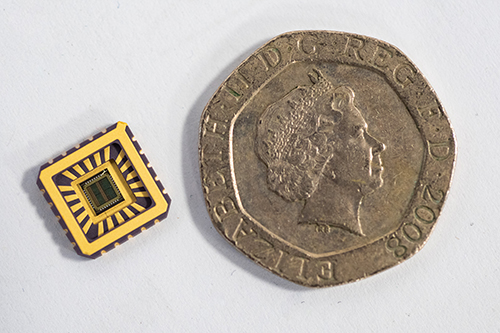 Artificial neurons on silicon chips that behave just like the real thing have been invented by scientists – a first-of-its-kind achievement with enormous scope for medical devices to cure chronic diseases, such as heart failure, Alzheimer's, and other diseases of neuronal degeneration.

Critically the artificial neurons not only behave just like biological neurons but only need one billionth the power of a microprocessor, making them ideally suited for use in medical implants and other bio-electronic devices.

The research team, led by the University of Bath and including researchers from the Universities of Bristol, Zurich and Auckland, describe the artificial neurons in a study published in Nature Communications.

Designing artificial neurons that respond to electrical signals from the nervous system like real neurons has been a major goal in medicine for decades, as it opens up the possibility of curing conditions where neurons are not working properly, have has their processes severed as in spinal cord injury, or have died. Artificial neurons could repair diseased bio-circuits by replicating their healthy function and responding adequately to biological feedback to restore bodily function.

In heart failure for example, neurons in the base of the brain do not respond properly to nervous system feedback, they in turn do not send the right signals to the heart, which then does not pump as hard as it should.

However developing artificial neurons has been an immense challenge because of the challenges of complex biology and hard-to-predict neuronal responses.

The researchers successfully modelled and derived equations to explain how neurons respond to electrical stimuli from other nerves. This is incredibly complicated as responses are ‘non-linear’ – in other words if a signal becomes twice as strong it shouldn’t necessarily elicit twice as big a reaction – it might be thrice bigger or something else.

They then designed silicon chips that accurately modelled biological ion channels, before proving that their silicon neurons precisely mimicked real, living neurons responding to a range of stimulations.

The researchers accurately replicated the complete dynamics of hippocampal neurons and respiratory neurons from rats, under a wide range of stimuli.

Professor Alain Nogaret, from the University of Bath Department of Physics led the project. He said: "Until now neurons have been like black boxes, but we have managed to open the black box and peer inside. Our work is paradigm changing because it provides a robust method to reproduce the electrical properties of real neurons in minute detail.

"But it's wider than that, because our neurons only need 140 nanoWatts of power. That's a billionth the power requirement of a microprocessor, which other attempts to make synthetic neurons have used. This makes the neurons well suited for bio-electronic implants to treat chronic diseases.

"For example we're developing smart pacemakers that won't just stimulate the heart to pump at a steady rate but use these neurons to respond in real time to demands placed on the heart – which is what happens naturally in a healthy heart. Other possible applications could be in the treatment of conditions like Alzheimer’s and neuronal degenerative diseases more generally.

"Our approach combines several breakthroughs. We can very accurately estimate the precise parameters that control any neurons behaviour with high certainty. We have created physical models of the hardware and demonstrated its ability to successfully mimic the behaviour of real living neurons. Our third breakthrough is the versatility of our model which allows for the inclusion of different types and functions of a range of complex mammalian neurons."

Professor Giacomo Indiveri, a co-author on the study, from the University of Zurich and ETF Zurich, added: "This work opens new horizons for neuromorphic chip design thanks to its unique approach to identifying crucial analog circuit parameters."

Another co-author, Julian Paton, Professorial Research Fellow in Physiology in the School of Physiology, Pharmacology and Neuroscience at the University of Bristol and University of Auckland, said: "Replicating the response of respiratory neurons in bioelectronics that can be miniaturised and  implanted is very exciting and opens up enormous opportunities for smarter medical devices that drive towards personalised medicine approaches to a range of diseases and disabilities."

The study was funded by a European Union Horizon 2020 Future Emerging Technologies Programme grant and a doctoral studentship funded by the Engineering and Physical Sciences Research Council (ESPRC).