Life-like robots soon to be reality 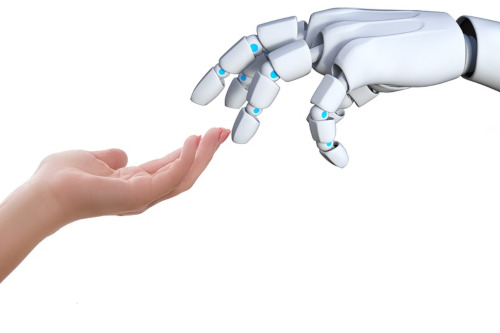 Life-like robots that can make decisions, adapt to their environment and learn, are one step closer thanks to a University of Bristol team who has demonstrated a new way of embedding computation into soft robotic materials. This new advance, published in Science Robotics, could create new robotic possibilities to environmental monitoring, pollution clean-up, drug delivery, prosthetic devices, wearable biosensing and self-healing composites.

So far, the complexity and range of learnt behaviours which can be created using only materials-based control approaches have been limited.

Taking inspiration from biology, the concept of Soft Matter Computers (SMCs) aims to mimic the workings of the vascular system, where hormones such as adrenaline are released into the bloodstream and disperse throughout the body. When detected by a receptor, hormones then trigger responses in particular parts of the body such as increased blood flow in flight muscles and dilation of the pupils in the eyes.

Now, researchers from Bristol’s Faculty of Engineering, led by Professor of Robotics Jonathan Rossiter, have successfully demonstrated a new mechanism that enabled computation to be embedded into three soft robots. In the paper, the team describe how a conductive fluid receptor (CFR) is a viable and fundamental building block for a range of SMCs and next-generation robots.

In the future, soft matter computers could mirror this process by translating information within the structure of a fluidic tape that travels through the soft body of the robot, and then is detected by an appropriate receptor and then generates an output.

Professor Rossiter said: “We have taken an important step toward entirely soft, autonomous robots and for smart materials to move beyond stimulus-response relationships which could enable the intelligent behaviours seen in living organisms. Soft robots could become even more life-like; capable of independently adapting to their environment and can demonstrate the diversity of behaviours seen in the natural world.”