Scientists reveal how a faulty gene leads to kidney disease 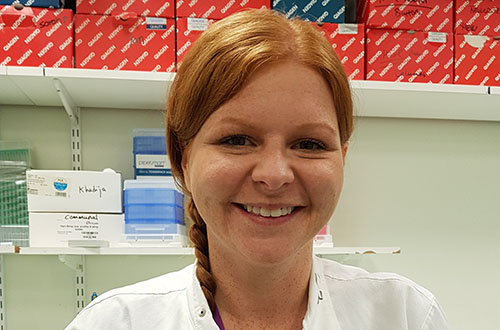 New insights into why a faulty gene involved in a devastating form of a kidney condition called nephrotic syndrome leads to disease in some patients have been identified in new Kidney Research UK-funded research led by the University of Bristol. The findings, published in the Journal of the American Society of Nephrology (JASN), could pave the way for new ways to prevent or treat the condition, by revealing new targets to intervene in the process. Around 1 in 50,000 children are diagnosed with nephrotic syndrome each year.

Lead author Dr Louise Farmer and the research team discovered that a protein called TRPC6, which controls how calcium enters cells, also acts as an 'anchoring' protein in the kidney, controlling how kidney cells called podocytes move around and maintain the structure of the kidney's filter.

The team has found that in cells containing the same TRPC6 fault as some patients with nephrotic syndrome, this anchor is lost, directly affecting the kidney's filter because it makes podocytes sticky and unable to move. When podocytes cannot move, holes develop in the filter and it cannot stop important proteins from passing through into the urine.

Our kidneys act as a filter to clean the blood, allowing waste products to enter the urine while retaining important proteins in the body, similar to a sieve. The kidney's filter is made of several cell types, including cells called podocytes. In nephrotic syndrome, this filter doesn’t work properly and larger holes develop in the sieve, so essential proteins escape into the urine. This latest research sheds light on why this happens.

"Although we knew that faulty TRPC6 causes kidney disease, we did not know this protein had this anchoring role in the podocyte until now," explained Dr Farmer. "TRPC6 is present throughout the body but patients with the faulty gene only develop problems in their kidneys. We thought TRPC6 might interact with something else within kidney cells and we wanted to identify what that might be."

The Bristol team discovered that TRPC6 sticks to a protein called calpain and keeps it located in the right place in the cell, similar to an anchor. With TRPC6 anchoring it in place, calpain can cut proteins involved in sticking the cell down, so the cell moves in a controlled manner. In some patients, the part of TRPC6 that acts as a calpain anchor is missing and their cells are too sticky and cannot move, which leads to disease.

Dr Farmer, Research Associate in the Bristol Medical School: Translational Health Sciences (THS), added: "We knew faulty TRCP6 had a role in causing nephrotic syndrome, but this latest work has identified a new role for this protein, which is altered in disease.

"We are really excited by our study. It reveals calpain could be a target for new drugs. Calpain-controlling drugs are already being trialled as a treatment for Alzheimer’s disease, so it shows these drugs may also be able to act in another way to treat a kidney condition."

Marc Stowell, Executive Director of Communications and Fundraising at Kidney Research UK, said: "This exciting study shows how a faulty gene can affect how kidneys work at the molecular level. It's really important to do work like this to understand kidney disease, in the hope it can reveal new ways to treat it."

The reality of living with a rare form of kidney disease

In 1999, Anna Maria Steel had a huge shock when she found out she had a rare genetic form of nephrotic syndrome called FSGS caused by a fault in the TRPC6 gene. "Even though my mother had a history of kidney disease, and I had protein in my urine during my first pregnancy, there had never been mention of a possible genetic kidney condition."

She continued: "For the last thirty years, my mother had simply been told she had nephrotic syndrome.  Although really interested in our diagnosis she also had an ill-founded sense of guilt that she had passed on her condition to her daughter. But I had a naive sense of hope, now we had a precise genetic cause. As a patient, having something concrete to hold on to – in this case the likely cause of our condition - provided some comfort and a sense of empowerment."

Anna Maria is a huge supporter of Kidney Research UK and a former trustee, and her family has generously supported this work through the charity.

"Knowing our genetics has enabled us to support research to better understand this condition," she explained. "We continue to fundraise and support renal research in the hope that one day a cure may be found."

"It has been a privilege to work with the family while this research has been happening, especially since Anna-Maria's mother, Monika, provided generous funding to make this research possible,” said Marc Stowell, of Kidney Research UK. "We're delighted that we've helped the family get some answers about this rare form of kidney disease and hope we can offer more families the same hope.”

'TRPC6 binds to and activates calpain, independent of its channel activity, and regulates podocyte cytoskeleton, cell adhesion and motility' by L Farmer et al in Journal of the American Society of Nephrology (JASN)

Its total commitment to renal research ranges from £12 to £15 million.

Kidney Research UK is dedicated to substantially reducing these numbers through funding life-saving research into kidney disease and by generating public awareness of kidney health.

Even though cases of kidney failure are increasing by four per cent every year, a lack of funding means Kidney Research UK is unable to fund all of the high quality research we would like to.