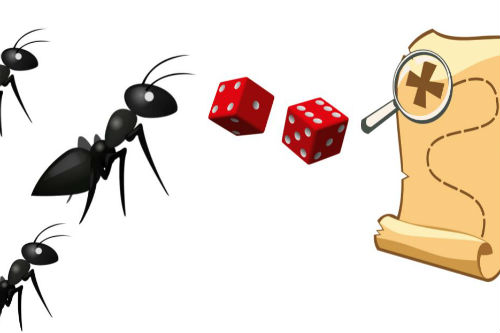 Many animals have to move around in their environment to find resources to live and reproduce.

Scientists have studied particular examples of this for many years but there are not many unifying frameworks to understand the general organising principles of animal movement.

This is especially true for animal collectives like ant colonies, whose individual routes as they search for food can look rather like a ‘random walk’.

Now an inter-disciplinary team of scientists from the University of Bristol has developed a more fundamental model of collective movement that generates predictions for how individuals in tight-knit groups should move, considering how their movement behaviour should be optimised for colony-level success at finding food.

Their research is published today in the journal Royal Society Interface.

One of the authors, Dr Edmund Hunt from the University of Bristol’s Department of Engineering Mathematics, said: “We recognised that the challenge an ant colony has to solve is the same as the challenge of a gambler trying to maximise long-term wealth.

“The mathematician John Kelly produced a result in 1956 showing that the way to do this is to bet on games in proportion to the probability of winning – so bet more money on more likely outcomes.

“The ants, then, should allocate their foragers (their ‘wealth’) to foraging areas according to how likely they are to find food there.”

If this is indeed the best strategy, evolution should have produced movement behaviours that result in ants preferentially spending time in areas with high probability of payoff.

This results in mathematical models of movement that can be taken directly from statistical techniques originally developed in physics, to sample from complex probability distributions (complex ‘environments’).

The new framework for animal movement generates theoretical predictions for the way highly related collectives of organisms should move around, which in future can be examined experimentally in a wide range of biological systems.

‘Optimal foraging and the information theory of gambling’ by R. Baddeley, N. Franks and E. Hunt in Royal Society Interface