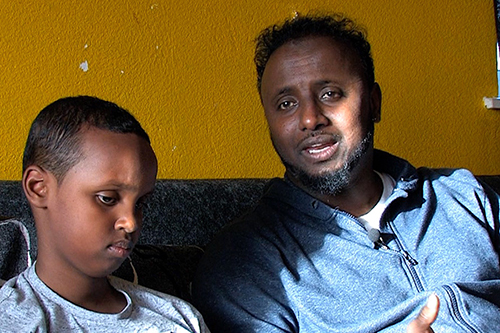 Musab with his father University of Bristol

World Autism Awareness Day (WAAD) is an internationally recognised day on 2 April every year to raise awareness of the hurdles that people with autism – and others living with autism – face every day. Following research by the University of Bristol, the National Institute for Health Research (NIHR) and Autism Independence, a film that tells the stories of Bristol-based Somali families affected by autism and the professionals who support them will be premiered tomorrow [Wednesday 3 April].

The research revealed that cultural stigma surrounding mental health, challenging behaviour and disability means that families in the Somali community often hide their child and don’t seek help early. Parents can feel isolated and don't engage with support services for their child. Research also suggests that service providers would benefit from a better understanding of the cultural perceptions of autism and the impact that this has on engagement with services.

Like other migrant groups, the Somali community has high numbers of children with autism, many of whom are likely to be severely affected. But there is no Somali word for autism, making it hard to understand and accept.

More than 70 families in the Bristol Somali community have one or more children with autism. They are supported by a community organisation, Autism Independence, led by Nura Aabe. Nura came to Bristol from Somalia at the age of ten and her oldest son has autism. Autism Independence works with health, social care and education services to bridge the gap between family’s needs and service provision.

Building on an NIHR Collaboration for Leadership in Applied Health Research and Care (CLAHRC West) research project, the film tells the stories of some of the families supported by Autism Independence and their experiences of accessing services. The film aims to increase awareness of autism in the Somali community, while also being a resource for professionals.

Nura Aabe, Director of Autism Independence (AI), said: "It's been wonderful and humbling to hear the impact that Autism Independence has had on these families. It’s an honour to have been able to help them over the years, and to share their stories with this film.

"We hope Overcoming Barriers will challenge the stigma of autism in the Somali community, and that families will benefit from a better understanding of the condition and the support that’s out there. The film will also be available to Somali communities in other countries, who share common experiences in terms of their understanding and acceptance of autism."

Dr Fiona Fox, Senior Research Associate at NIHR CLAHRC West and the University of Bristol, said: "Our earlier research with Autism Independence shed light on the challenges these families face in getting support for their children. It showed that service providers need to understand cultural views of autism to help them offer the best support for these families. We also identified a need to raise awareness and reduce stigma in the Somali community, and to provide support to encourage families to seek help for their children.

"When we shared these findings, many organisations asked for information, resources and training to help them work more effectively with these families. This was where the idea for the film came from."

'Overcoming Barriers: Autism in the Somali community' will be premiered at 10am on Wednesday 3 April 2019 at the Watershed, Bristol.

Somali and English versions of the film will be available online following the launch. The premiere, during World Autism Awareness Week, is free but tickets must be booked in advance via Eventbrite.

AI and CLAHRC West produced the film with the Therapeutic Media Company, which specialises in films for the health and social care sectors. This project is funded by the Economic and Social Research Council (ESRC) Impact Acceleration Account.