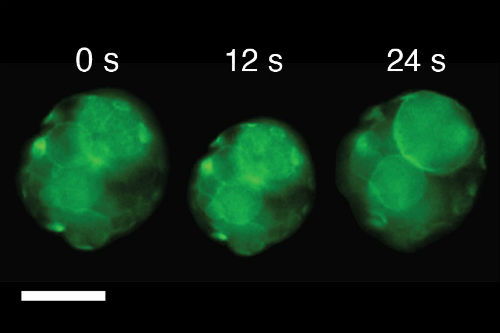 Snapshots of video images showing a single cluster of artificial cells exhibiting a single beat-like oscillation as the temperature was changed above or below 37 ⁰C; scale bar, 50 μm. Dr Pierangelo Gobbo, University of Bristol

A tissue-like material capable of synchronised beating when heated and cooled has been developed by a team of University of Bristol chemists.

The discovery, published in Nature Materials, is the first chemically programmed approach to producing an artificial tissue. The findings, which could have major health applications in the future, could see chemically programmed synthetic tissue being used to support failing living tissues and to cure specific diseases.

The development of synthetic tissue which can mimic the ability of living cells to produce functions such as beating and chemical detoxification has, until now, remained a major synthetic biology challenge.

A team, led by Professor Stephen Mann FRS and Dr Pierangelo Gobbo from Bristol’s School of Chemistry, chemically programmed artificial synthetic cells known as protocells to communicate and interact with each other in a highly co-ordinated way.

The researchers constructed two types of artificial cells each having a protein-polymer membrane but with complementary surface anchoring groups. The team then assembled a mixture of the sticky artificial cells into chemically-linked clusters to produce self-supporting artificial tissue spheroids. By using a polymer that could expand or contract as the temperature was changed below or above 37 ⁰C, it was possible to make the artificial tissues undergo sustained beat-like oscillations in size.

Professor Stephen Mann FRS, Professor of Chemistry at Bristol and lead author, said: "Our approach to the rational design and fabrication of prototissues bridges an important gap in bottom-up synthetic biology and should also contribute to the development of new bioinspired materials that work at the interface between living tissues and their synthetic counterparts."

The study was funded by NSERC Canada and EU Horizon 2020 grants.