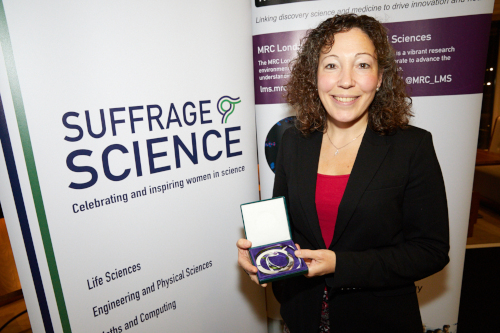 A hundred years after the first women in Britain got the vote, women still only make up 23% of those working in core science, technology, engineering and mathematics occupations in the UK.

Solving the pipeline issue is a long-term challenge for maths and computing with female students making up only 15% of undergraduate computer science students and 37% of mathematical sciences students in 2016/17, compared to 61% of Biological Sciences students.[1]

Today, 11 scientists from across the UK will be presented with hand-crafted jewellery at the Suffrage Science awards ceremony held at the British Library, London. The awards are voted for by their industry peers and celebrate women in science and encourage others to enter science and reach senior leadership roles.

The 11 awardees are chosen by the previous award holders for their scientific achievements and ability to inspire others. Dr Snaith is celebrated for her work which has primarily focused on the connection between Random Matrix Theory and certain number theoretical functions.

She said: "This award is particularly special as it is passed from one individual mathematician to another.  To have been chosen by someone as brilliant as Frances Kirwan is an unbelievable honour.  It delights me to have seen a very clear improvement in the prominence of women in mathematics during the course of my career, but representation is still low.  I look forward to seeing this change further as we challenge gender stereotypes in maths and as the academic community learns to accept a diversity of lifestyles and priorities.  In the meantime, it is wonderful to see awards like this encouraging women in the field."

The awards themselves are items of jewellery, inspired by the Suffrage movement, and are passed on as heirlooms from one female scientist to the next.

Alongside the awards former BBC journalist Susan Watts will lead a discussion about the most striking positive developments and ongoing challenges faced by women in maths and computing. On the eve of Ada Lovelace day new recipient, Professor Ursula Martin, University of Oxford will discuss her new book ‘Ada Lovelace: The making of a Computer Scientist’. Alongside inaugural awardee Professor Carron Shankland, University of Stirling who will share her experience of gender diversity in computing and the value of networks. While Professor Dame Celia Hoyles, University College London will share her insights on the current landscape of mathematics education and explore areas where more action is needed.

The Suffrage Science scheme was initiated by Professor Dame Amanda Fisher, Director of the MRC London Institute of Medical Sciences (MRC LMS) in 2011.

Amanda said: "The creation of the Maths and Computing Suffrage Sciences Awards in 2016 recognised the increasing importance of mathematics and computing to the life sciences. As in all branches of the awards their purpose is to celebrate female scientists, their scientific achievements and ability to inspire others. This is especially important in maths and computing where female students studying these subjects are still in the minority. We are delighted to welcome this year’s awardees into the growing Suffrage Science community and look forward to supporting them to inspire the next generation."

[1] Data from HESA data and analysis of all students by subject area and sex, data referred to is percentage of female students who enrolled in the first year of their full-time first degree in the UK https://www.hesa.ac.uk/data-and-analysis/students/what-study

The jewellery was created by art students from Central St Martins who worked with scientists to design pieces inspired by research and the Suffragette movement, from which the award scheme takes its name.