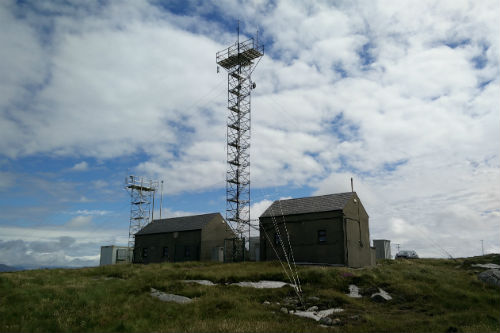 Mace Head research station on the west coast of Ireland is also one of the five global research stations that make up the AGAGE network. The station receives unpolluted air masses from the North Atlantic, making it ideal as a background station.

A network of greenhouse gas and ozone depleting substance measurements in the UK and Ireland has been awarded renewed funding of £2.1 million for continued operation for a further two-and-a-half years.

The network is led by Professor Simon O’Doherty, from the University of Bristol’s School of Chemistry and Professor Alistair Manning from the Met Office.

The network was launched in 2011 by researchers from the University of Bristol’s Atmospheric Chemistry Research Group (ACRG) and the first eight years of operation has resulted in a wealth of data and knowledge about the UK's GHG and ODS emissions.

The very precise measurements made across the network have allowed UoB and Met Office researchers to improve the understanding of sources of GHG and ODP emissions in the UK.

Mace Head and Tacolneston also measure a suite of halocarbons using a Medusa GC-MS – a specialised pre-concentration unit coupled to a gas chromatograph-quadrupole mass spectrometer. Mace Head is part of the international Advanced Global Atmospheric Gas Experiment (AGAGE), which has been measuring the composition of the atmosphere since 1978.

The UK DECC network measurements are used in conjunction with an atmospheric transport model and inverse model, both developed at the UK Met Office, to infer emissions and to better understand the processes that drive these emissions. These inverse emission estimates are compared to the inventory estimates compiled for BEIS to look for, understand and investigate any differences.

Annually the inventory emission estimates are submitted by the UK to the United Nations Framework Convention on Climate Change (UNFCCC) as part of the Kyoto Protocol and subsequent agreements. The UK is one of only three countries that also reports inverse estimates generated from a national network. This process of verifying the bottom-up inventories using atmospheric observations and modelling is held as a gold standard for national emission estimation.

Efforts by the UK DECC network team led to a realisation that the UK HFC-134a (a refrigerant gas in automobiles) inventory estimates were overestimated. The work resulted in the UK HFC-134a inventory being reassessed and the emission estimates reduced.

The UoB ACRG has been running a programme of atmospheric monitoring of GHG and ODS at Mace Head in the Republic of Ireland since 1987.  Measurements from the extended UK DECC Network allows researchers to infer emissions of these harmful greenhouse gases at higher resolution than has been previously possible.

Professor O’Doherty said: “The GHG emissions verification work carried out at the University of Bristol is unique, the UK are one of the only countries in the world to regularly include emission estimates calculated by the combination of atmospheric measurements and inverse modelling in their annual submission to the UNFCCC.

“It is now becoming more widely recognised that this type of work needs to be extended to other reporting nations.”