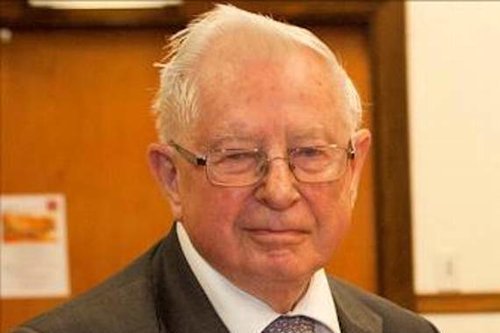 Haydn Mason was a Fellow of the Learned Society of Wales and an Officier dans l’Ordre des Palmes Académiques. Those two characters, the proud and loyal Welshman and the true citizen of the civilized world, would be revealed within a very short time in any conversation with Haydn. Whilst Voltaire and Enlightenment Studies were his central and ongoing focus, his curiosity and erudition were extraordinarily wide-ranging, and conversations with him, whether on literature, art, music, theatre, sport or current affairs, were characterized by sparkle and insight, punctuated of course by giggles and guffaws but also by intense pauses in which he would listen, reflect and more often than not move the topic onto a different and deeper plane.

His loyalty to Bristol over the past thirty-seven years makes it easy to forget the rich cosmopolitanism of his earlier life. Born in Pembrokeshire in 1929, Haydn obtained degrees from Aberystwyth, from Middlebury College in Vermont and from Oxford, took up teaching posts in the US, the UK and France, was a Reader by 1965, a professor by 1967 and a Dean by 1974. His imagination and sense of excitement, as well as his administrative expertise, were surely recognized by his appointment to a Chair of European Literature within the School of European Studies at the University of East Anglia, a brand-new institution committed to ‘doing things differently’ and to inter-disciplinarity long before it became fashionable: Haydn himself said later that the institution was ‘thought by some at that time to border on the heretical’, but he embraced it. Following a stint as Dean of that School, he broadened his horizons yet again with teaching posts in the Sorbonne and in Maryland. It was, however, Bristol which had the fortune to be his final academic home, and he served us as Professor of French Language and Literature, Head of the Department of French and Chair of the School of Modern Languages, as well as on countless committees and working parties, most notably perhaps the Art Lectures Committee which has done so much to broaden the outreach of the University and its Faculty of Arts to a wide Bristol public.

Nationally and internationally, too, his erudition and leadership were acknowledged: Haydn was President of the Society for French Studies, of the Association of University Professors of French, of both the British and the International Societies for Eighteenth-Century Studies, and of the Modern Humanities Research Association.

It is as an editor that he will be most widely remembered: as one of the Directors of the Voltaire Foundation, Editor (for nineteen years) of Studies in Voltaire and the Eighteenth Century, and General Editor of the Complete Works of Voltaire, he was responsible for the production to the highest international standard of scores of volumes, covering literary texts, correspondence, plays, tales and essays. This colossal workload did not prevent him from writing his own original books, from his doctoral thesis on Bayle and Voltaire, through his biography of Voltaire, translated into several languages, and close studies of Cyrano de Bergerac’s L’Autre Monde and Voltaire’s Candide, as well as an authoritative survey of French Writers and their Society, 1715-1800. If his editorial work was unfailingly scholarly, many of these other publications have as their aim to make his erudition available in a sprightly and inspiring way to students and non-specialists.

Outside the classroom and the study, Haydn’s collegiality seemed quite literally boundless. Unfailingly kind, graciously grateful and immoderately generous, he took an interest in everything, and in everybody. This is nowhere better exemplified by his long presidency of the University’s MacInnes Club, dedicated to fostering contacts and relationships between students and staff on a cross-faculty basis, but I suspect he was even more energized by less formal gatherings, very frequently instigated by Adrienne and himself, at which whirlwinds of good cheer and conversation were always liable to spill over beyond the available space. Adrienne was with Haydn, always independent but immensely supportive, throughout his Bristol years: much more together than the sum of their parts, they inspired us all by their mutual respect, love and companionship.

In her moving message to close friends following Haydn’s death, Adrienne found expression for the feelings of us all in words which cannot be improved: “Death spared him an increase in the memory loss which had begun to distress him, as well as the prospect of ever-diminishing mobility. The courage and tenacity with which he faced the tribulations of old age mean that my final memories of him are of a week together in London where we saw friends, ate out and shared reading, music, art and theatre together. I feel privileged to remember him in that way.”

So, dear Adrienne, do we all.