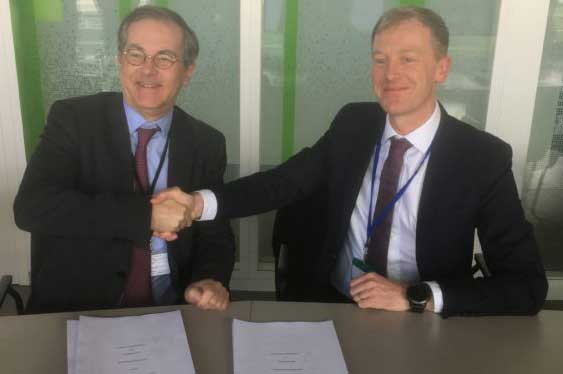 Dr Erik Lithander signs the agreement on behalf of the University alongside Jacques Sacreste, VP for International and Partnerships at EDF R&D

A delegation from the University of Bristol, led by Pro-Vice Chancellor Dr Erik Lithander, visited the research laboratories of EDF France near Paris in late April in order to cement its longstanding relationship with the energy company.

Dr Lithander and Jacques Sacreste, EDF R&D’s Vice-President for International and Partnerships, signed a framework agreement during the visit; later on, it was also signed by Paul Spence, EDF Energy’s Director of Strategy and Corporate Affairs. This agreement will form the basis for a strengthened strategic relationship with the EDF Group, EDF R&D in France and EDF Energy in the UK.

The EDF Group, EDF Energy and the University of Bristol have long been strategic partners. Twenty years ago, EDF Energy (then British Energy) became one of the main industrial stakeholders involved in the seismic qualification facilities within Bristol’s Earthquake and Geotechnical Engineering research group.

More recently, EDF Energy became a member of the South West Nuclear Hub, allowing the company to collaborate further on research projects with the University and other industrial and academic partners of the Hub.

Erwan Galenne, Head of R&D Nuclear, EDF Energy, said: ‘With this new Framework Agreement, EDF, EDF Energy and the University of Bristol have the ability to strengthen an already longstanding partnership. Areas for collaboration are clear, supporting our common ambition to reduce the cost of nuclear energy by tackling scientific and technological challenges and by accelerating innovation’.

Professor Tom Scott, Co-Director of the South West Nuclear Hub, said: ‘I'm proud to be associated with EDF and the South West Nuclear Hub led by the University of Bristol. If we’re to tackle global climate change effectively, then nuclear alongside other low-carbon energy sources has to be a significant energy contributor instead of coal and gas. To make this happen, all these energy sources must continue to innovate and drive down costs until they become comparable to (or ideally cheaper than) hydrocarbon alternatives’.

Caption: Dr Erik Lithander, Pro-Vice Chancellor (International) signs the agreement on behalf of the University alongside Jacques Sacreste, VP for International and Partnerships at EDF R&D.

EDF Energy is the UK’s largest producer of low-carbon electricity, meeting around one-fifth of the country’s demand. It generates electricity with eight nuclear power stations, more than 30 wind farms, one gas and two coal power stations, as well as with combined heat and power plants.

EDF Energy is leading the UK's nuclear renaissance with the construction of a new nuclear power station at Hinkley Point C. This will provide low-carbon electricity to meet 7% of UK demand. The project is already making a positive impact on the local and national economy, as well as boosting skills and education.

To find out more about its R&D activities visit: www.edfenergy.com/about/research-development.

The South West Nuclear Hub provides a focus for nuclear innovation, research and teaching in the south west of the UK. The Hub incorporates the existing collaboration between the Universities of Bristol and Oxford, the Nuclear Research Centre (NRC).

With a dedicated building, opened in summer 2016 at the University of Bristol, the Hub has introduced a step-change across higher education in the region to accelerate and grow nuclear research and teaching activities. The Hub provides a common location for academia, industry and government to come together to meet the opportunities and challenges facing nuclear energy in the UK.