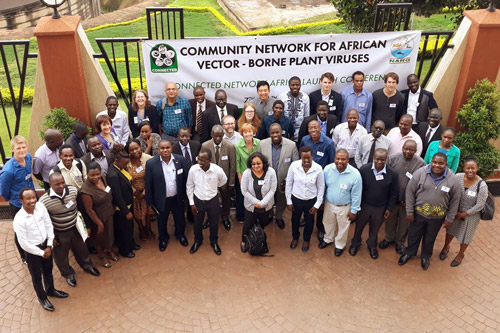 A plant science conference in Uganda which drew together dozens of world-class researchers from across Sub-Saharan Africa and the UK this month has confirmed the growing strength of a network whose collaborations promise to deliver solutions to devastating crop diseases in the years ahead.

Delegates from ten African countries joined counterparts from the UK at the CONNECTED Virus Network Africa Launch Conference, which took place in Kampala, Uganda, from May 7 to 9.

It was immediately followed by a two-day training workshop aimed at early career researchers looking to develop skills including research grant proposal writing.

Professor Neil Boonham from Newcastle University, UK and Co-Director of the CONNECTED project, says the outcomes of the conference confirm the value and potential of the project, and is urging more people to come forward to join the growing network.

“Our Africa Launch Conference was a superb event, with a tangible buzz of excitement amongst delegates for the whole week,” he said.

“The CONNECTED project is as yet just a few months old, but we are already seeing promising collaborations between highly-skilled and enthusiastic researchers to find solutions to plant disease in Sub-Saharan Africa.

“The project’s focus on encouraging early career researchers is already paying dividends, and it’s clear that one of the legacies of CONNECTED will be a cohort of scientists who have begun to form collaborations, injecting real energy to develop solutions to tackling devastating vector-borne plant disease in the years ahead.

“We are now looking to recruit still more scientists and researchers who share our passion to tackle food insecurity, and we are inviting anyone with an interest to join us at

“Importantly, we are not simply looking to recruit those working on issues directly related to plant disease, but also scientists and researchers working in other disciplines. For example, we need social scientists, economists, geographers and others as we work hard to make this a truly inter-disciplinary project.”

Delegates heard a number of research-focused presentations on issues including pest management, plant protection, and agricultural extension in Africa. There was a series of workshops during which delegates considered the project’s future priorities for the pump-prime research funding which forms an integral part of the opportunities offered by CONNECTED, as well as identifying training needs and opportunities for future inter-disciplinary work.

Day Two of the conference was hosted at The National Crops Resources Research Institute, and delegates enjoyed a tour of the laboratory facilities as well as some of the fields which are hosting much of the Institute’s work on crops including cassava, sweet potato and maize.

The CONNECTED network is funded by a £2 million grant from the UK government’s Global Challenges Research Fund, which supports research on global issues that affect developing countries. It is led by Professor Gary Foster from the University of Bristol’s School of Biological Sciences jointly with Professor Neil Boonham from Newcastle University.

1. Plant diseases significantly limit the ability of countries in Sub-Saharan Africa to produce sufficient staple and cash crops such as cassava, sweet potato, maize and yam. The CONNECTED project focuses on their spread by vectors – insects that transmit a disease from one plant to another. Limited crop production causes poverty, malnutrition and food insecurity, which in turn hinder economic and social development. A range of new factors are set to compound the situation and raise the threat still further: the emergence of new virus diseases; climate change; a growing population, and resource limitations.

3. The research projects with the greatest regional impact will then be grown into larger scale activities to achieve still greater bearing on the battle to control plant disease in Sub-Saharan Africa. CONNECTED will also provide training and capacity-building opportunities in Sub-Saharan Africa.

4. The CONNECTED project is so named as it is the COmmunity Network for AfricaN vECTtor-borne plant viruses.