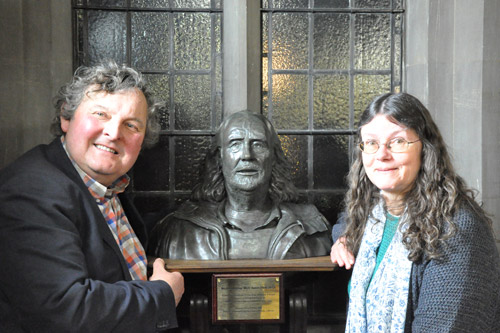 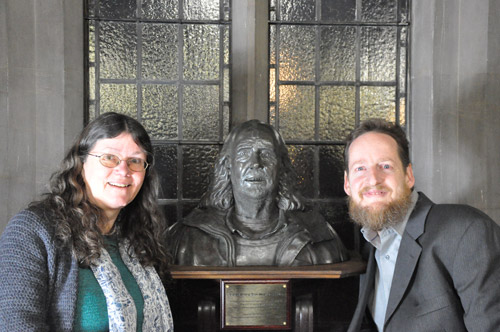 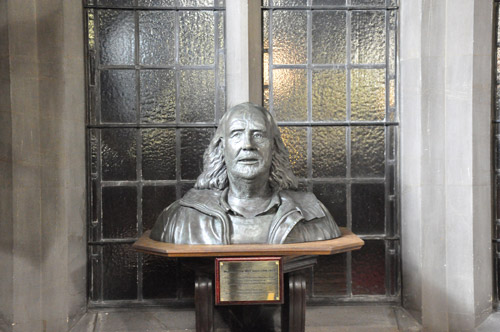 A close-up of the bust University of Bristol

A bronze bust of the famous archaeologist and Time Team regular, Professor Mick Aston, has been unveiled at the University of Bristol.

The lifelike bust, created by American artist Alex Peter, has been installed at the University's Department of Anthropology and Archaeology, where Professor Aston worked for more than 25 years.

Professor Aston, who passed away in 2013, was a very familiar face on Channel 4’s popular archaeology programme, Time Team, which ran for 19 years.

Famous for his stripy sweaters, he brought with him a wealth of knowledge about ancient landscapes and archaeology.

Alongside his TV work, he was also Professor of Landscape Archaeology at the University of Bristol.

The idea of a bronze bust came from the large Time Team community. It was cast in the Mussi artworks foundry in Berkeley, California, as a special commission.

The artist, Alex Peter, was inspired to do the work through an admiration for Mick. He said: "It was for his obvious passion and love of the subject, and the academic rigour and process which supported that love.

"To acknowledge Aston for his academic contributions is a beautiful and a very meaningful thing."

In a short ceremony held at the University of Bristol on Friday evening, the bust was unveiled by Mick's long-term partner, Teresa Hall, in the presence of his family, friends and academic colleagues.

Teresa said she was thrilled that Mick will be remembered in this way in the University that was his home for so many years.

The bust is located in the library of the former Baptist College, now the Reception Room of the Department of Anthropology and Archaeology.

Bristol’s Professor Mark Horton, who worked alongside Mick for many years, said: "Mick was such an amazing archaeologist in so many different ways. He was passionate about lifelong learning for all, and, of course, a great communicator.

"It's great that generations of our students will be able to link the famous face with his wonderful books on landscape and monastic archaeology."

Members of the public are welcome to view the bust by contacting the School of Arts.

Professor Mick Aston (1 July 1946 – 24 June 2013) was Professor of Landscape Archaeology, and Professor Emeritus at the University of Bristol. As well as being a leading authority on landscape, medieval and monastic archaeology, he made a major contribution to the popularising of archaeology, through the Channel 4 Time Team programme (1994-2011), accessible publications and numerous public lectures. He was awarded honorary doctorates by the Universities of Worcester and Winchester. He was the author of 15 books.

Alex Peter is an artist, working in Berkeley, California, where he is a traditional figurative sculptor. He works on fine art projects and teaches in his studio in Richmond CA. The artwork was cast in the Mussi Artworks Foundry, one of America’s leading art foundries with over 2,000 regular artists as clients.

The University of Bristol has been teaching archaeology since the 1970s. Professor Aston was appointed in 1979 as a tutor in archaeology in the University’s extra mural department. His work took him to numerous evening classes around the south west and, at the same time, he was developing a long-term research project at Shapwick, which turned into a seminal study of a Somerset village. The University appointed him to the Professorship of Landscape Archaeology (a term that he had coined himself in a book in 1974) in 1996, and shortly afterwards he transferred to the staff of the Department of Archaeology, retiring in 2004, to devote more time to research and publication.