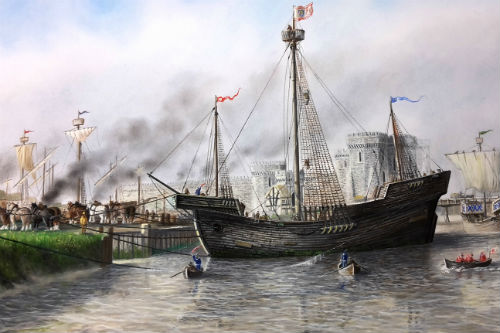 Reconstruction painting showing the Newport Medieval Ship being hauled into a side pill (inlet) downstream from Town Pill and Newport’s castle and bridge. The ship foundered here while undergoing repairs, following the collapse of its support structures. David Jordan/Newport Museum and Art Gallery 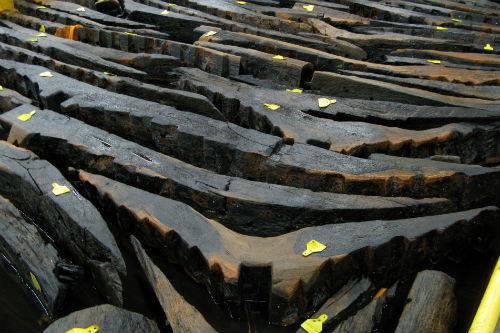 Oak framing timbers from the ship. After disassembling and raising the ship timbers, they were stored in tanks of fresh water in a large industrial unit. Following cleaning and recording, the timbers were soaked in a wax solution and vacuum freeze dried. The timbers will be used to reconstruct the medieval hull in a museum in the future Toby Jones/Newport Museum and Heritage Service 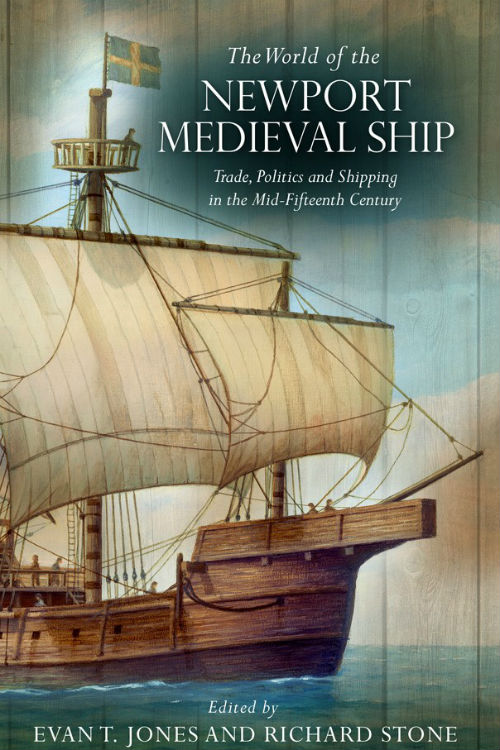 Front cover of ‘The World of the Newport Medieval Ship: Trade Politics and Shipping in the Mid-Fifteenth Century’

A team of maritime historians and archaeologists, led by academics at the University of Bristol, has published compelling new evidence about the remains of the largest and best-preserved late medieval ship ever discovered.

The Newport Medieval Ship, said to be one of the most important archaeological finds in decades, was uncovered in 2002 during construction work in the Welsh city of Newport.

Now its story, along with new insights about what it was used for, the people who sailed it and how it ended up in South Wales, have been brought together in a new book launched this week called ‘The World of the Newport Medieval Ship: Trade Politics and Shipping in the Mid-Fifteenth Century’, edited by University of Bristol historians Drs Evan Jones and Richard Stone and with a foreword by HRH The Prince of Wales.

Following its discovery, a public campaign was launched to excavate the ship and record the associated findings using cutting-edge technology. Thousands of timbers have now been preserved as the next step towards the ship's eventual display in Newport.

Dr Jones, the book’s lead editor, said: “It has been a huge project: for this wasn't a little coastal vessel. It was one of the great merchantmen of Atlantic Europe with an estimated carrying capacity of 168 tonnes: a vessel designed for shipping bulk goods, such as wine, from southern Iberia to the ports of northern Europe.”

Over the last sixteen years archaeologists at the Newport Medieval Ship Project have discovered much about the ship.  It was built around 1450 in the Basque Country of northern Spain and traded to Portugal. But later repair work used British timber, suggesting it was locally owned by the time the ship foundered while undergoing repairs in Newport during the late 1460s.

Ships were the largest and most complex machines medieval people produced: as they still are today. But how was the Newport Medieval Ship used? Where did it sail and how often? What did it carry? Who owned it and how did a Basque-built vessel end up in British hands?

Dr Jones added: “In this new volume, we explore the ship's world, to interpret it for the public who pressed for its preservation. In the process we found out much that is surprising.

“When people imagine medieval shipping, they tend to think it will be like the Age of Sail they know from the 18th-19th centuries, but with smaller and more primitive ships. It really wasn't like that.”

The Newport Medieval Ship was not small: it was larger than most of the sailing ships that plied the seas of later centuries. Indeed, the merchant ships of the mid-fifteenth century were bigger than those of the Elizabethan period.

Co-author, Dr Ian Friel, said: “Vessels like this were the container ships of their day: they towered above most craft afloat.”

The size of the ships made them defensible and the arms found onboard the ship show that its owners were prepared to defend it.

However, the book also reveals that the seas of northern Europe were not as pirate infested as most suppose. And when pirates attacked, were politer than popularly imagined.

Dr Susan Rose, another co-author, added: “At least in the North, pirates rarely killed anyone, they generally released the crew unharmed and they often sought to justify their actions in the courts: Blackbeards they weren't!”

So, what was life like on board? Perhaps the chief revelation discussed in the book is that medieval mariners spent surprisingly little time at sea.

Ships sailing from the Severn Sea (as the Bristol Channel was then known) spent only three to four months at sea each year: most of their time being spent in foreign ports as their cargoes were sold and the proceeds used to buy the goods for their voyage back home. English and Welsh sailors on the Lisbon run spent more time in Portugal than either their own homes, or at sea.

Dr Jones said: “Historians have wondered how this Basque ship ended up in Newport. It seems likely that the end of the Hundred Years War (1453) and the onset of the Wars of the Roses in England (1455-85) played a big part. This is the period that Game of Thrones is based on: not entirely unfairly.

“The loss of Bordeaux forced English merchants to concentrate heavily on Portugal during the 1460s, from where they sourced their wine. But Spanish Castile remained an enemy and the Basques were forbidden from selling ships to the English. So, it is likely that the Newport Medieval Ship transferred from Basque to British hands through seizure, rather than sale.”

The ship was likely owned by William Herbert, the Earl of Pembroke and Lord of Newport. He rose to become Wales' chief magnate during the 1460s, possessing a private navy and army.

However, his loyalty to Edward IV caused him of fall out with his erstwhile ally: The Earl of Warwick - popularly known as 'The Kingmaker'. In 1469, Warwick defeated Herbert at the Battle of Edgecote Moor: Herbert was executed, and his lands and goods seized.

Following Herbert's death, a letter from Warwick, discussed in the volume, refers to a ship he was having repaired in Newport.

This was probably one of Herbert's former fleet which had been used for both war and for conducting peaceful trade through the nearby Bristol.

Yet, if this was the Newport Medieval Ship, the refit was not a success: the ship foundered when the scaffolding supporting it collapsed.

Dendrochronological evidence shows this took place after spring 1468. Attempts at salvage failed and the remains were inundated in the silt of Newport for the next five hundred years. The Earl of Warwick, meanwhile, didn't last much longer. He was killed on 14 April 1471, cut down trying to escape following his defeat at the Battle of Barnett.

‘The World of the Newport Medieval Ship: Trade, Politics and Shipping in the Mid-Fifteenth Century’ edited by E. Jones and R. Stone is published by University of Wales Press.