Watch out for the University’s clock-inspired Gromit this summer 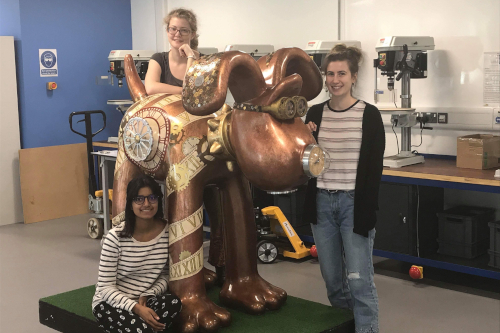 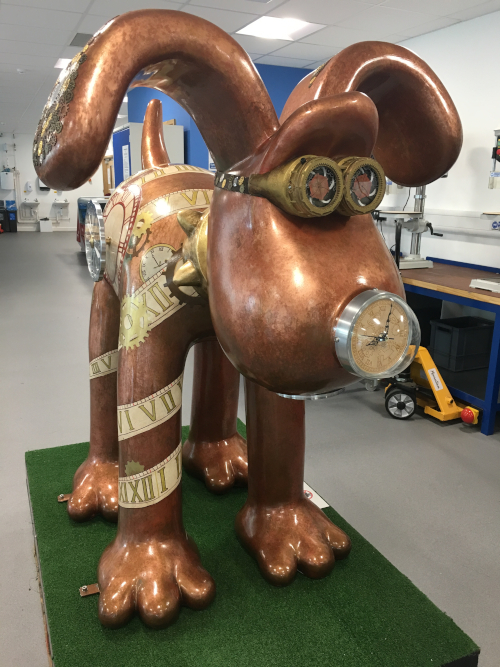 Students at the University of Bristol have given one of Bristol’s best-loved characters an innovative makeover.

He’s one of over 60 giant Wallace, Gromit and Feathers McGraw sculptures which will adorn the streets, buildings and parks of Bristol from 2 July to 2 September as part of the trail organised by Wallace & Gromit's Grand Appeal, the Bristol Children's Hospital charity.

The 5ft tall pooch was inspired by 'Bristol time' – a little-known historical fact that Bristol used to be 10 minutes behind London until 1844 when times needed to be aligned to avoid confusion over railway timetables.

The timekeeping Gromit has been created by Engineering students Christine Braganza, Ella Allan and Octavia Clark. Along with technicians in the Faculty of Engineering, a total of 350 hours has been spent on the Gromit.

In keeping with the clock theme, he's been called 'A Grand Gromplication' - a pun on the term 'grand complication' which describes fancy and intricate watches.

Located in Bristol Museum, members of the public will be able to turn a wheel to rotate his tail and spin the clock on his nose, while a light inside his body reveals how the internal mechanism works. A total of 350 cogs have been used, both for decorative and functional purposes.

Christine, who is coming to the end of her 2nd year studying Mechanical Engineering, jumped at the chance to get involved due to her love of 2005 film 'Wallace & Gromit: The Curse of the Were-Rabbit'.

She said: "Although we haven’t lived in Bristol during any of the previous trails, we've seen several of the permanent sculptures and have seen the buzz it brings to Bristol even after the trails are officially over.

"It's been a really fun thing to work on alongside our studies. For me, it's great to have the opportunity to be creative while also using skills we're learning as part of our degrees."

Mechanical Engineering student Ella added: "Steampunk was our starting point as it naturally involved gears and cogs. This led onto the theme of clocks which is apt given how the city used to have its own time zone.

"Cutting into the Gromit was one of the most nerve-racking experiences as we didn't want to crack the fibreglass. We weren't sure what we would find inside and whether our mechanisms would actually fit!"

Octavia, who studies Engineering Design, says the team has learnt a lot through the process and hopes that children will be fascinated by the final result.

She said: "It's overwhelming to see the finish sculpture and to think how many people will be seeing our Gromit.

"I used to love opening things up to see how they worked when I was a child, which is how I knew I wanted to become an engineer. It was really important to us that children would be able to see the mechanism inside our Gromit."

The University of Bristol is one of the 'Trailblazer' organisations playing a significant role in the trail. Alongside Renishaw and Rolls-Royce, the three companies have created sculptures which showcase Bristol’s diverse creative and tech industries. The sculptures are being unveiled at the iconic Brabazon Hangar at Bristol’s Filton Airfield.

The partnership with Wallace & Gromit's Grand Appeal has been coordinated by the Faculty of Engineering's Industrial Liaison Office (ILO), which helps students and researchers to work closely with industry and business.

Colin Dalton, Undergraduate Education Director in the Faculty of Engineering at the University of Bristol, said: "Creating such a special and innovative Gromit with the Grand Appeal has been a brilliant opportunity for our students, allowing them to develop their skills in a real-world context.

"We’re really excited to be part of what promises to be a truly innovative trail, working alongside partners in the city to help raise vital funds for the Children's Hospital."

In addition to its trailblazing sculpture, students and staff within the Faculty of Engineering are also working on a further three interactive sculptures – details of which are being kept under wraps for now.

The Grand Appeal is the Bristol Children's Hospital Charity.

The Grand Appeal supports Bristol Children’s Hospital by funding pioneering, life-saving equipment and research, including ventilators, a cardiac hybrid theatre and an inter-operative MRI scanner, so that patients have access to the best possible healthcare and life-saving equipment. We provide free accommodation to families of critically ill patients from the Neonatal and Paediatric Intensive Care Units in our Cots for Tots House and Paul’s House, as well as providing a free Family Support service to parents and siblings.  We ensure the hospital is a vibrant and child friendly place to help distract young patients through our music therapy, art and play programmes and much more.

Bristol Children’s Hospital covers the largest catchment area of any children’s hospital in England, treating more than 100,000 children each year, and serves as the paediatric intensive care centre for the whole South West region. The hospital is an international, national and regional specialist centre of excellence for a range of services including neurosurgery, burns, epilepsy, cardiac, leukemia and bone marrow transplants.