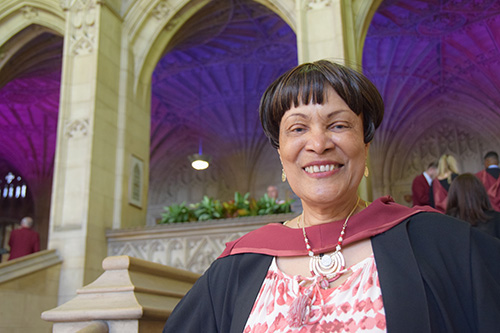 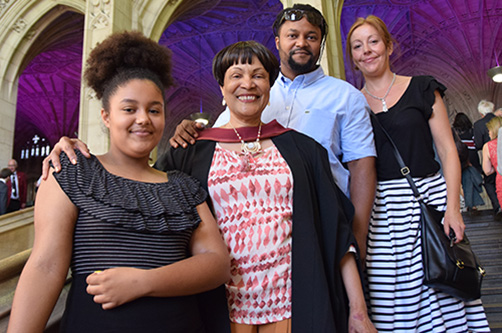 Antonette with her granddaughter Grace, son William and daughter-in-law Kate

A grandmother from Bristol has graduated from the University of Bristol today [20 July] after discovering a love of learning in her 70s.

Eulinda Antonette Clarke-Akalanne – known as Antonette – was initially worried the University of Bristol wouldn't accept her because of her age but she flourished on a foundation course and has gone on to achieve a 2.1 in BA Anthropology.

Despite suffering from severe visual impairment, which worsened during her studies, Antonette persevered and enjoyed studying so much that she will be returning for a Masters degree in Black Humanities – a new course which starts at the University in September.

She collected her degree in front of her proud family in the Wills Memorial Building alongside the other 5,000 students of all ages who are graduating this week.

Antonette, who is now 76 and lives near Ashley Down, said: "For a long time I wanted to study Anthropology and considered doing it at the Open University while working as a nurse and midwife but I never had time due to managing my home and raising three children.

"When I retired from the NHS I did various voluntary jobs to fill my time, including being a respite foster carer and an advisor for Citizens Advise Bureau but something was still missing from my life, so when I heard about the Foundation Year in Arts and Humanities I thought it would be a wonderful way to get back into studying and achieve my dream - Anthropology.

"I have enjoyed studying at the university of Bristol. It's been a wonderful experience and I got on well with staff and students.

"Graduating is a little bit frightening. It’s like leaving home, because university has been such a huge part of my life. Having said that, I will be returning in September to start a Master's degree. Learning is a lifelong ambition for me, it's part of me now."

The Foundation Year in Arts and Humanities is a unique pre-degree programme which values personal experience and potential over A-Levels and qualifications.

Foundation students study a wide range of subjects to build up their knowledge in the arts and humanities in the hope that, on successful completion of the year, they can progress to an undergraduate degree, either at the University of Bristol or elsewhere.

Antonette completed the foundation year in 2014 before embarking on an Anthropology degree, which she had to put on hold due to her eyesight problems.

She said: "I found that I couldn’t read for very long because of my blurred vision and was worried I would fail my units, so I paused my degree part way through. I had two cataract operations at the start of 2016 but still has problems with blurriness and spots in front of both eyes.

"Doctors still don't know what causes the blurriness. It's just something I have to live with. I’ve had excellent support from the University. I've been given technology to enlarge text, extra time for exams and note takers to transcribe lectures.  This was great because I couldn't read my own handwriting."

Antonette used to catch the 6.15am train from Bridgwater to Bristol four days a week to attend university, but since moving to Bristol last year she's had a new lease of life. She is now involved in various societies and is an actress in Breathing Fire, the UK’s only Black Women’s Playback Theatre company.

A grandmother to seven grandchildren, she is a fervent advocate of education and said: "I believe that education is power, I encouraged my three children to go to university. My two sons have degrees in engineering and my daughter has a BA in Childhood Studies, actually from the University of Bristol.

"When I told one of my granddaughters that I was off to uni, she exclaimed 'but you’re not 18, Grandma!'."