Volcanoes fed by ‘mush’ reservoirs rather than molten magma chambers 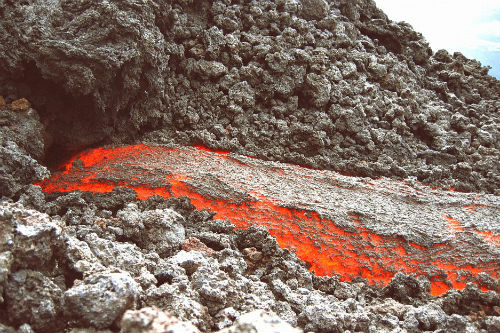 Instead, the study suggests that volcanoes are fed by so-called ‘mush reservoirs’ – areas of mostly solid crystals with magma in the small spaces between the crystals.

Our understanding of volcanic processes, including those leading to the largest eruptions, has been based on magma being stored in liquid-filled ‘magma’ chambers – large, underground caves full of liquid magma. However, these have never been observed.

The new study, by researchers at Imperial College London and the University of Bristol and published this week in Nature, suggests the fundamental assumption of a magma chamber needs a re-think.

Lead author Professor Matthew Jackson, from the Department of Earth Sciences and Engineering at Imperial, said: “We now need to look again at how and why eruptions occur from mush reservoirs. We can apply our findings to understanding volcanic eruptions with implications for public safety and also to understand the formation of metal ore deposits associated with volcanic systems.”

In order to erupt, volcanoes need a source of magma – melted, liquid rock – containing relatively few solid crystals. Traditionally, this magma was thought to be formed and stored in a large underground cave, called a magma chamber.

Now, with sophisticated modelling of mush reservoirs, the research team has come up with a solution. Within the mush reservoir scenario, the magma is less dense than the crystals, causing it to rise up through the spaces between them.

As it rises, the magma reacts with the crystals, melting them and leading to local areas containing magma with relatively few crystals. It is these short-lived areas of increased magma that can lead to eruptions.

Co-author Professor Stephen Sparks, from the University of Bristol’s School of Earth Sciences, said: “A major mystery about volcanoes is that they were thought to be underlain by large chambers of molten rock. Such magma chambers, however, were very difficult to find.

“The new idea developed by geologists at Imperial and Bristol is that molten rock forms within largely crystalline hot rocks, spending most of its time in little pores within the rock rather than in large magma chambers. However, the rock melt is slowly squeezed out to form pools of melt, which can then erupt or form ephemeral magma chambers.”

As well as the initiation of eruptions, the new mush reservoir model can help explain other phenomena in volcanic systems, such as how the magma chemical composition evolves and how much older crystals can be erupted within younger magmas.