Business incubator partnership set to contribute £26.9 billion to UK economy and 22,000 jobs by 2030 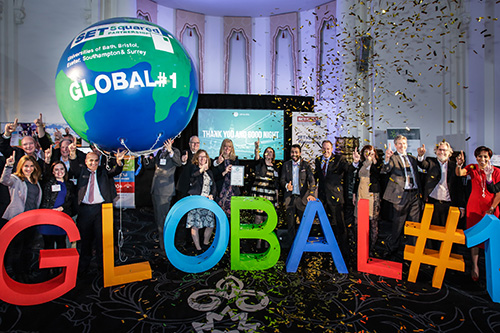 A national university business incubator, including the Bristol SETsquared Centre, is predicted to contribute £26.9 billion to the UK economy by 2030, according to new figures.

SETsquared, which is a partnership between the universities of Bath, Bristol, Exeter, Southampton and Surrey and was ranked the number one business incubation and start-up growth acceleration network in the world earlier this year, will also create over 22,000 jobs according to an independent research report published by Warwick Economics & Development (WECD).

Key findings from the report:

The Bristol SETsquared Centre is based at Engine Shed, in the heart of the city's Enterprise Zone, and near to its planned new Temple Quarter Enterprise Campus.

Through the centre, which offers 115 desks across 16 offices, entrepreneurs have access to business coaching and mentoring, workshops, networking events and strong links to the university.

Monika Radclyffe, Centre Director at SETsquared Bristol, said: "The findings from the report seal the important role we play in nurturing new businesses, entrepreneurship and innovation in the UK, as well as the positive impact this has on the UK economy through job creation and GVA contribution.

"With the expansion of SETsquared’s services to those companies that are scaling up, and the significant growth we have seen in the number of start-ups we are supporting, we are confident that we will exceed the projections outlined by the WECD in its latest report."

One of the incubator’s global success stories is Bristol-based Ultrahaptics, a University of Bristol spin-out which was established in 2013 and has successfully raised £31 million investment to date.

The company has developed a truly exceptional haptic technology that uses ultrasound, to enable people to feel virtual objects in mid-air with their hands.

Ultrahaptics, which has doubled in size over the past 12 months, has seen phenomenal growth across markets from automotive and VR, and has clients including BOSCH, Dell, HARMAN and IGT.

Speaking about SETsquared's support, Steve Cliffe, CEO of Ultrahaptics, added: "SETsquared has been our home since the early days of the business. Not only have they provided a literal home, in the form of our first office space, but they've also provided everything else we all need from a home: support, advice, connections, guidance, and training."

A copy of the full WECD report is available to download.

More information for aspiring tech entrepreneurs who wish to apply to SETsquared Bristol is available on its website.