Russian connections of reptile from the Jurassic Coast 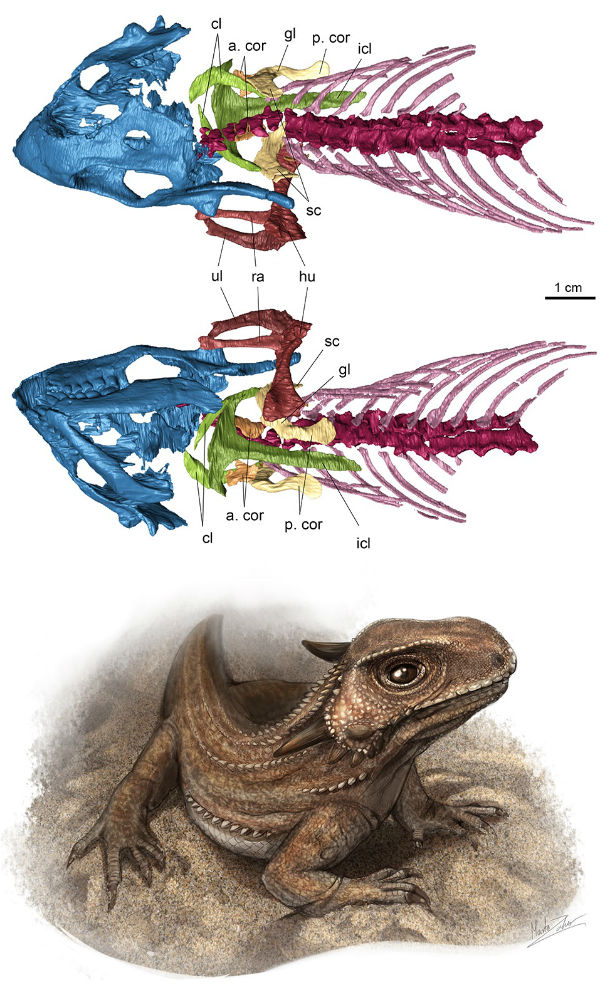 Scan of the skeleton of Kapes and life restoration Marta Zaher, University of Bristol.

The Triassic red rocks of the Devon coast around Sidmouth, some 240 million years old and pre-dating the earliest dinosaurs preserve fossil fishes, amphibians and reptiles, and a new specimen, uncovered with help from palaeontologists at the University of Bristol, shows distinct connections with Russia.

The reptile, called Kapes, is a small lizard-like creature with a spiny skull. However, the fossil is delicate, and started to break up when its collector, Dr Rob Coram of Swanage, began to clean it up.

Dr Coram said: “I tried everything I could. I have had a lot of experience of removing rock from fossils using a fine needle and working under the microscope. But this one was a nightmare. When I touched it with a needle, small pieces of bone fell off.”

Marta said: “The scans are amazing. They show every detail of the tiny, five-centimetre (two inch) long skull. You can see each tooth, and even the wear patterns. Almost all the tiny bones of the palate and braincase are there.”

She added: “This identifies the animal without question as a procolophonid. These lived worldwide at the time, and they were important plant-eaters, with broad teeth fused to their jaws, and which wore down under grinding from the tough plant food.”

Several years ago, less complete specimens of the procolophonid had been found in the Devon rocks, and two academics then at the University of Bristol, Patrick Spencer and Glenn Storrs, had suggested the Devon animal was the same as Kapes from central Russia.

Professor Mike Benton from the University of Bristol’s School of Earth Sciences, added: “The new study confirms that the two animals are very close relatives, two species of the genus Kapes.”

“This is most unusual, to have evidence of a biogeographic connection over thousands of kilometres. In the Middle Triassic, there was dry land in the UK and in Russia, but the area in between was filled with the Muschelkalk Sea, covering Germany and much of central Europe.”

Kapes was a plant-eater, as shown by its broad, heavily worn teeth. It has a powerful body and short snout and might well have constructed burrows to escape into during the heat of midday. In other parts of the world, including South Africa, procolophonids have been found inside fossilised burrows. Finally, the spines on its skull are a mystery – they probably had a defensive function in making the animal seem larger and more-scary when it was faced by a predator. Also, the spines might have made it harder for a predator to swallow the animal head-first.

The work is published in the journal Papers in Palaeontology, as a lavishly illustrated and very detailed account, which forms part of Marta’s PhD.

‘The Middle Triassic procolophonid Kapes bentoni: computed tomography of the skull and skeleton’ by M. Zaher, R. Coram, and M. Benton in Papers in Palaeontology