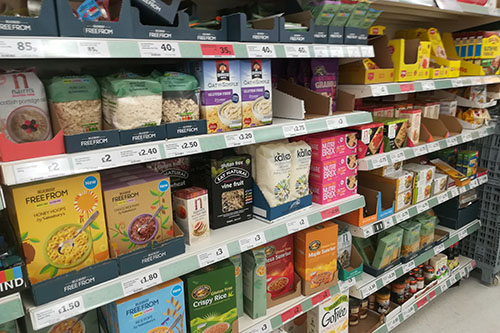 Full or partial bans on GPs prescribing gluten-free (GF) foods to people with coeliac disease save the NHS money in the short-term. But the impact on patients, especially those from deprived areas, is unknown, NIHR-funded researchers at the University of Bristol have warned.

The study, which looked at prescribing data across 94 per cent of GP practices in England between 2012-2017, revealed more than a quarter of clinical commissioning groups (CCGs) have already either completely banned prescriptions of gluten-free foods to anyone with coeliac disease or banned prescriptions to adults.

A further 34 per cent limit the amount and types of products available - a similar approach to new Department of Health and Social Care guidelines, which recommend limiting the items available to bread and flour mixes.

The Department for Health and Social Care announced the policy change in February following a consultation. The move was welcomed by Coeliac UK, as policymakers had been considering completely removing all gluten-free products from being prescribed. Instead they no longer recommend the prescription of items such as pasta, cakes and biscuits.

The research team, led by Professor Will Hollingworth from Bristol Medical School, estimated that if all CCGs in England had introduced a complete ban in 2014, when spending on gluten-free foods was at its peak, the NHS would have saved £21.1million a year. However, there is no evidence for how prescribing under the new guidelines, or complete or partial bans, will affect patients.

Gluten-free prescribing was highest in practices: in more affluent areas, as diagnoses of coeliac disease tend to be higher in these populations in rural locations, where access to alternative sources of gluten-free foods is more problematic with more patients aged 75 plus, as these patients get free prescriptions

The researchers found complete bans created savings of more than £2.5million for the CCGs that have adopted them. The new policy is unlikely to bring significant further savings as bread products made up around 65 per cent of spending. They concluded: “The introduction of more restrictive GF prescribing policies has been associated with 'quick wins' for CCGs under extreme financial pressure. However, these initial savings will be largely negated if CCGs revert to recently published national recommendations.”

Dr Myles-Jay Linton, from the National Institute for Health Research Collaboration for Leadership in Applied Health Research and Care West (NIHR CLAHRC West) and the University of Bristol’s Health Economics team, said: "We found that, perhaps unsurprisingly, bans on gluten-free food prescribing cut NHS expenditure, at least in the short-term. Our research also suggests that the partial restriction recommended by the Department of Health and Social Care might negate the savings CCGs have made.

"But it's unclear what the impact on people with coeliac disease will be. The most affluent may simply switch to store-bought alternatives, while patients who are strapped for cash may have no choice but to buy the cheapest – gluten containing – foods.

"Retail gluten-free products aren’t always equivalent to those available through prescription. For example, prescribed bread and flour is fortified with vitamins and minerals, but generally retail products aren’t. While common sense might suggest that removing cakes and biscuits from prescriptions is a sound move, we just don’t know what the long-term impact will be on patients, especially those from poorer backgrounds."

About NIHR CLAHRC West
The NIHR Collaboration for Leadership in Applied Health Research and Care West (NIHR CLAHRC West) works with its partner organisations, including local NHS and public health providers, to conduct applied health research and implement research evidence, to improve health and healthcare across the West. It undertakes applied health research projects, in collaboration with its partners across the region and nationally. The research it does must have a real-world application and fall into one of our broad thematic areas of 'improving the management of chronic health conditions' and 'public health interventions and population health'.