Enzyme-powered protocells rise to the top 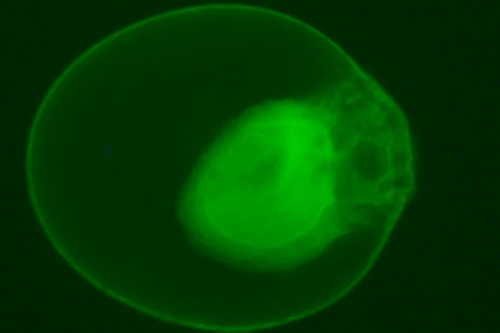 Fluorescence microscopy image of an enzyme-containing protocell assembled from a mixture of DNA and clay particles. Professor Stephen Mann, University of Bristol.

Researchers at the University of Bristol have successfully assembled enzyme-powered artificial cells that can float or sink depending on their internal chemical activity. The work provides a new approach to designing complex life-like properties in non-living materials.

Microorganisms have evolved a high degree of control over their locomotion using motility mechanisms that in their simplest form include simple gliding and gas bubble buoyancy.

In a new study published today in the journal Nature Chemistry, Professor Stephen Mann from the University of Bristol’s School of Chemistry, together with colleagues Pavan Kumar and Avinash Patil in the Bristol Centre for Protolife Research have addressed this challenge by designing a new type of  model protocell based on the self-assembly of DNA and clay.

Two different types of enzymes – catalase and glucose oxidase – are trapped inside the protocells and used as chemical engines to switch on or turn-off, respectively, the formation of oxygen bubbles.

The catalase-generated gas bubbles are trapped inside the protocells so that the micro-capsules become buoyant and travel upwards in the water column. They then descend back to their initial location by using the oxygen as a fuel for glucose oxidase.

As a consequence, the protocells oscillate up and down the water column. The researchers use this programmable motility for the self-sorting of mixed protocell communities, for the flotation of macroscopic objects and for accessing and processing remote chemical environments.

Professor Mann said “This work could open up a new horizon in protocell research where movement and cell-like operations can be coupled over relatively long distances.

“For example, oscillatory motion of the buoyant protocells might be used to transfer the motile protocells in and out of light or dark zones in the water column to establish a rudimentary form of phototrophic behavior.

“Although the research is at an early stage, our overall vision is to develop new proto-biological technologies for the development of functional microscale systems with life-like properties.”

‘Enzyme-powered motility in buoyant organoclay/DNA protocells’ by P. Kumar, A. Patil and S.Mann in Nature Chemistry.