To float or not to float? Mystery solved as to why algae balls float and sink 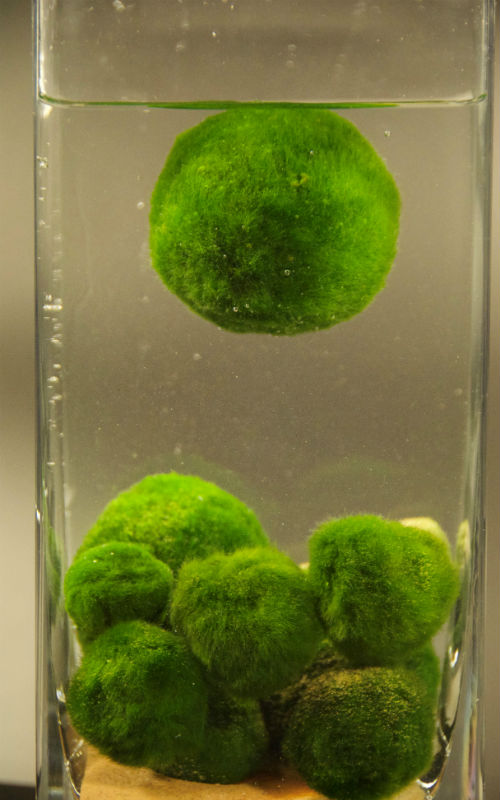 An aggregation of marimo balls in the laboratory, with one that has become buoyant. Dora Cano-Ramirez and Ashutosh Sharma

Scientists from the University of Bristol have uncovered the age-old mystery of why marimo algae balls sink at night and float during the day.

The balls are a rare form of algae found naturally in lakes in the northern hemisphere, particularly Japan and Iceland.

In Japan they have such important cultural significance, they are a protected species. They are also very popular with aquarium owners, although, in recent years, their popularity has resulted in a significant decline.

In a new paper, published today in the journal Current Biology, Bristol biologists have shown that photosynthesis and daily circadian rhythms are responsible for the floating and sinking of the balls.

When these aquatic plants photosynthesise, they become covered in tiny bubbles of oxygen, which the scientists predicted was the cause of their buoyancy.

They tested their theory by using a chemical that stops photosynthesis. The chemical stopped bubbles forming, so the marimo did not float.

The lab then investigated whether the photosynthesising surface of the algae balls had a biological “clock” or circadian rhythm.

Marimo were kept under dim red light for several days. They discovered that if the marimo were then given bright light at the time that corresponded to the start of the day, they floated much more rapidly than if they were given light at the middle of the day.

This shows that marimo floating is controlled by their biological clock.

The study may have future implications for conserving marimo, which have experienced a global decline.

PhD student Dora Cano-Ramirez, lead author of the study, said: “Unfortunately, marimo balls are endangered, being currently found in only half the lakes where they were once spotted.

“This might be caused by changes in light penetration due to pollution. By understanding the responses to environmental cues and how the circadian clock controls floating, we hope to contribute to its conservation and reintroduction in other countries.”

Japanese botanist, Takuya Kawakami, from the Sapporo Agricultural College (now Hokkaido University) first discovered the green algae aggregates in the bay of Lake Akan and named them “marimo” in 1897.

However, Aegagropila linnaei the scientific name was given by Carl Linnaeus in 1753 in samples collected at the Dannemora Lake in Sweden.

Marimo from Lake Akan were designated a Natural Monument of Japan in 1921, and Special Natural Treasure in 1952 which started the conservation efforts on these so called “mysterious creatures” because most of its physiology and ecology are still unknown.

Lake Akan is unique due to its basin shaped form, shallow bays and diverse mineral water which harbours a Marimo community of an estimated 600 million, with some individuals recorded to be over 30 cm.

Due to its beauty and critically-endangered status, Marimo has been used as an environmental education tool and is subject of a three-day annual festival by the Ainu people in Hokkaido, where marimo is welcomed at the beginning of the festivities and returned to the lake at the end in a sacred ceremony.