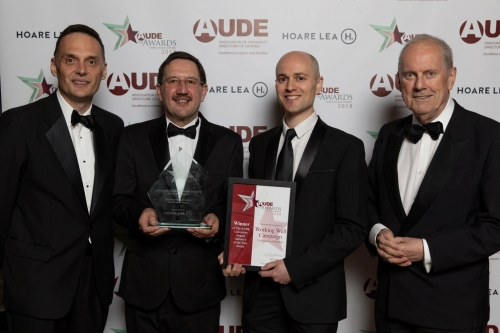 A pioneering campaign to improve the health and wellbeing of staff at the University of Bristol has won a national award.

The Working Well campaign, which targets over 500 staff in the Estates department, was praised for its positive impact by the Association of University Directors of Estates (AUDE), winning the 'Impact Initiative of the Year' award.

This award seeks to recognise a specific initiative which is having a significant positive impact on the institution, sector or profession as a whole.

Working Well began as a health and wellbeing campaign geared towards operational estates staff at the University and aimed to engage staff in a positive way about their own health and wellbeing, to give them new ways to manage their health, and in the process reduce sickness absence.

It then took on a life of its own, gaining momentum and succeeding well beyond its initial scope with input and assistance from the University’s Centre for Sport, Exercise and Health.  Activities included pedometer challenges, discounted physio sessions, 'taster' gym passes and resource cards that helped the user think about issues from stress to healthy eating.

Paul Smith, Deputy Director of Estates at the University of Bristol, said: "We are thrilled and delighted that our initiative to reduce sedentary behaviour and increase wellbeing in the workplace has been recognised by AUDE. We believe so much from the project can be replicated by universities and other large organisations across the country.

"The engagement from staff has been phenomenal and some great ideas came in, such as self-sponsored walking lunches. Yoga and running groups have been set up, and a University team has now completed both the Bristol 10k and the Bristol Half Marathon."

The campaign was practically focused too, looking at common health concerns among Estates staff and taking a targeted approach to try and fix them. Scrubber-drier machines have been introduced to replace mopping in many areas, reducing the risk of back and wrist pain, while body armour for Security Officers was reviewed, with new kit weighing 30 per cent less than the old – again reducing the risk of physical discomfort for staff at work.

David Tonkin, Head of Facilities Management Soft Services at the University of Bristol, added: "We're already talking to other UK universities about this campaign and they can see how readily it would translate to their set-ups. It's cross sector, it's low-cost and the results are very visible.

"In just four weeks' time, the new running group I'm a part of will be taking on the Bristol 10K for the second time. There are 22 of us from the University, including many who have never run before. The Working Well campaign gets the credit for this, and we've become a really inspired and enthusiastic group of colleagues and friends."

Speaking on behalf of AUDE, Jane White (Executive Director) said: "The whole of the working world is in a process of adjusting its thinking and its practices when it comes to the health and wellbeing of the workforce.

"Bristol have grasped a thorny issue in an admirable manner. We felt the Working Well campaign truly demonstrated impact, and that it had taken on a life of its own in terms of its success as demonstrated by the depth of engagement of the Bristol staff with the campaign.

"Working Well is replicable across the higher education sector in so many ways and we'd encourage other universities to learn what they can from the Bristol approach."

AUDE is a not-for-profit organisation. Any funds generated through the activities of the Association are used to fulfil its objectives and mission.

AUDE's members are generally represented by the most senior member of staff responsible for managing, planning, constructing and maintaining all types of accommodation for Higher Education Institutions. Though arrangements vary, most Directors of Estates are also involved in managing a wider range of capital projects and services including cleaning, security, grounds maintenance, space planning and management, car parking and traffic and, in some institutions, additional services such as catering, conference and sports facilities, insurance, furniture and equipment and printing.