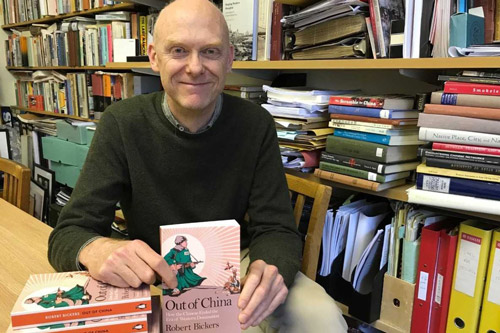 The shortlist for the Wolfson History Prize 2018 is announced today and includes a book by a University of Bristol historian.

‘Out of China: How the Chinese Ended the Era of Western Domination’ by Professor Robert Bickers is one of six works shortlisted for the Wolfson History Prize which recognises and celebrates books which combine excellent in historical research with readability for a general audience.

The judges found it “an ambitious book delivered in an animated, accessible style. Based on an impressive sweep of archival material, with brilliant vignettes on subjects such as pre-war Shanghai, Bickers demonstrates a clarity and depth of knowledge which helps to frame modern China.”

Professor Bickers, who is based at the University of Bristol’s Department of History, said: “I am absolutely delighted that my book has been shortlisted for such a prestigious and important award.

“With this book I show how China’s bullish nationalist confidence is shaped by narratives of its historic weakness, but I have also questioned that story, and showed it for the partial and distorting truth that it is. And Out of China showcases as well other Chinese experiences of the twentieth century, other roads once taken, many now blocked.”

Professor Sir David Cannadine, speaking on behalf of the judges said: “This year’s shortlist is a testament to the strength of writing on history in the UK today. It brings together established academics with first time writers, spanning a huge variety of times and places.

“What unites the authors is a commitment to share careful research and a deep love of their subject with as wide an audience as possible. As judges we found ourselves engrossed, challenged, and delighted by our reading. It is with great enthusiasm that we announce the shortlist for 2018.”

Paul Ramsbottom, Chief Executive of the Wolfson Foundation which awards the Prize, added: “The Wolfson History Prize is a public expression of the importance of history to the cultural life of the country. It recognises books that sparkle with brilliance, breaking new ground in our understanding of the past – and which are written in ways that appeal to a wide audience.

“The Prize is awarded by the Wolfson Foundation as part of a number of wider programmes of support for history and heritage –ranging from museums to historic buildings to university research.”

All six shortlisted authors will be speaking at the British Academy on Wednesday. May 9 for BBC Radio 3’s Free Thinking programme.

Christopher de Hamel won the Prize in 2017 with his book ‘Meetings with Remarkable Manuscripts’ (Allen Lane, Penguin Press) which presented 12 medieval manuscripts in the form of a ‘conversation’ with the reader.

Other past winners have included Mary Beard for ‘Pompeii: The Life of a Roman Town’, Antony Beevor for ‘Stalingrad’ and Simon Schama for ‘Patriots and Liberators: Revolution in the Netherlands, 1780–1813’.

About the shortlisted books

Out of China: How the Chinese Ended the Era of Western Domination
Robert Bickers(Allen Lane, Penguin Press)

Out of China uses a brilliant array of unusual, strange and vivid sources to recreate a now fantastically remote world: the corrupt, lurid modernity of pre-war Shanghai, the often tiny patches of 'extra-territorial' land controlled by European powers, the entrepôts of Hong Kong and Macao, and the myriad means, through armed threats, technology and legal chicanery, by which China was kept subservient until, gradually, it emerged from Western control. That struggle continued until the end of the twentieth century, through the Cold War and its aftermath, and shaped both Chiang Kai-shek's rule in Taiwan and the China of Mao Zedong and his successors. Today Chinese nationalism stays firmly rooted in memories of its degraded past – the quest for self-sufficiency, the determination to assert China's standing in the world, to stake its outstanding territorial claims, and never to be vulnerable to renewed attack. History matters deeply to Beijing's current rulers – and Out of China explains why.

Robert Bickers is Professor of History at the University of Bristol.

The spellbinding story of a visionary British surgeon who changed medicine forever. In The Butchering Art, historian Lindsey Fitzharris recreates a critical turning point in the history of medicine, when Joseph Lister transformed surgery from a brutal, harrowing practice to the safe, vaunted profession we know today. Victorian operating theatres were known as 'gateways of death', Fitzharris reminds us, since half of those who underwent surgery didn't survive the experience. This was an era when a broken leg could lead to amputation, and surgeons were still known to ransack cemeteries to find cadavers. And in squalid, overcrowded hospitals, doctors remained baffled by the persistent infections that kept mortality rates stubbornly high. At a time when surgery couldn't have been more dangerous, an unlikely figure stepped forward: Joseph Lister, a young Quaker surgeon. By making the audacious claim that germs were the source of all infection – and could be treated with antiseptics – he changed the history of medicine forever. With a novelist's eye for detail, Fitzharris brilliantly conjures up the grisly world of Victorian surgery, revealing how one of Britain's greatest medical minds finally brought centuries of savagery, sawing and gangrene to an end.

Lindsey Fitzharrisreceived her doctorate in the History of Science, Medicine and Technology at the University of Oxford and was a post-doctoral research fellow at the Wellcome Institute.

A Deadly Legacy: German Jews and the Great War

This book is the first to offer a full account of the varied contributions of German Jews to Imperial Germany’s endeavors during the Great War. Historian Tim Grady examines the efforts of the 100,000 Jewish soldiers who served in the German military (12,000 of whom died), as well as the various activities Jewish communities supported at home, such as raising funds for the war effort and securing vital food supplies. However, Grady’s research goes much deeper: he shows that German Jews were never at the periphery of Germany’s warfare, but were in fact heavily involved. The author finds that many German Jews were committed to the same brutal and destructive war that other Germans endorsed, and he discusses how the conflict was in many ways lived by both groups alike. What none could have foreseen was the dangerous legacy they created together, a legacy that enabled Hitler’s rise to power and planted the seeds of the Holocaust to come.

Tim Grady is Lecturer in History at the University of Chester.

Before the English embraced the slave trade, Africans in Tudor England lived free. They were baptised, married and buried by the Church of England, and paid wages like any other Tudors. Focusing on ten figures, but delving into the stories of many others, Black Tudors uncovers the experiences of men and women long forgotten by history. Serving the court, trumpeter John Blanke performed at Henry VII’s funeral and Henry VIII’s coronation, while Jacques Francis was a salvage diver employed to recover munitions from the Mary Rose. In London, Mary Fillis became one of the many Africans in England to be baptised, Reasonable Blackman plied his trade as a silkweaver in the plague years, Anne Cobbie was a prized prostitute and Dederi Jaquoah, Prince of the River Cestos, spent two years the guest of a city merchant. Edward Swarthye was a porter in a Gloucestershire manor house and Cattelena of Almondsbury lived independently in the English countryside. On the seas, Diego circumnavigated the globe with Sir Francis Drake and John Anthony was employed as a sailor. Together their stories challenge the idea that racial slavery was inevitable and force us to re-examine the seventeenth century to understand why perceptions changed so radically.

Miranda Kaufmann is a Senior Research Fellow at the University of London’s Institute of Commonwealth Studies.

Heretics and Believers: A History of the English Reformation

Centuries on, what the Reformation was and what it accomplished remain deeply contentious. Peter Marshall’s sweeping new history – the first major overview for general readers in a generation – argues that sixteenth-century England was a society neither desperate for nor allergic to change, but one open to ideas of “reform” in various competing guises. King Henry VIII wanted an orderly, uniform Reformation, but his actions opened a Pandora’s Box from which pluralism and diversity flowed and rooted themselves in English life. With sensitivity to individual experience as well as masterfully synthesizing historical and institutional developments, Marshall frames the perceptions and actions of people great and small, from monarchs and bishops to ordinary families and ecclesiastics, against a backdrop of profound change that altered the meanings of “religion” itself. This engaging history reveals what was really at stake in the overthrow of Catholic culture and the reshaping of the English Church.

Peter Marshall is Professor of History at the University of Warwick.

­­­­­­­­­­­Heligoland: Britain, Germany and the Struggle for the North Sea

Heligoland tells the story of a long and often troubled relationship which has defined modern Europe. For generations Britain and Germany have collided in a North Sea island half the size of Gibraltar. The two nations’ pasts are etched into its rust-coloured sandstone cliffs. Wherever you turn, Heligoland’s scarred landscape reveals the imprint of war: the craters and broken rock formations, the remnants of Germany’s naval fortress, built and demolished with equal determination. For much of the nineteenth century, this was Britain's smallest colony, an inconvenient and notoriously discontented outpost at the edge of Europe. Once Britain had ceded it to Germany, the island became a metaphor for Anglo-German rivalry. Turned into a naval stronghold under the Kaiser and again under Hitler, it was fought over in both world wars. Heavy bombardment by the Allies reduced it to ruins, until the Royal Navy re-took it. Eventually returned to West Germany, Heligoland became a showpiece of reconciliation, but one that continues to bear the scars of the twentieth century. Tracing this rich history of contact and conflict from the Napoleonic Wars to the Cold War, Heligoland brings to life a fascinating microcosm of the Anglo-German relationship.

Jan Rüger is Professor of History at Birkbeck, University of London.

First awarded by the Wolfson Foundation in 1972, theWolfson History Prize remains a beacon of the best historical writing being produced in the UK. Over £1.1 million has been awarded to more than 90 historians in its 46-year history. To be eligible for consideration, authors must be resident in the UK in the year of the book’s publication (the preceding year to the award), must not be a previous winner of the Prize and must have written a book which is readable, scholarly and accessible to the lay reader.

The Wolfson Foundation (www.wolfson.org.uk) is an independent grant-making charity that aims to promote the civic health of society by supporting excellence in the arts & humanities, education, science and health. Since 1955, almost £900 million (£1.9 billion in real terms) has been awarded to nearly 11,000 projects and individuals across the UK, all on the basis of expert peer review. The Wolfson Foundation is committed to supporting history and the humanities more broadly. Since 2012, awards across the UK of more than £10.7 million have been made to 186 Postgraduate Scholarships in the Humanities at universities, and some £12.6 million to museums and galleries, as well as numerous awards for historic buildings.

Rana Mitter, presenter and Professor of the History and Politics of Modern China, University of Oxford, will be joined by all six authors shortlisted for this year’s Prize for a debate about writing history and an insight into each of their books. The event is being recorded for broadcast by BBC Radio 3’s Free Thinking programme. It will be aired on Wednesday 23 May at 10pm. It will also be available as a BBC Arts and Ideas podcast. Tickets available via the British Academy website.