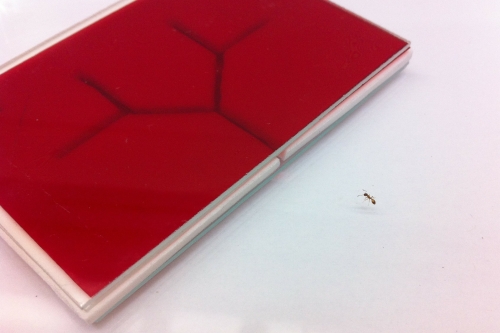 Unlike Derek Zoolander, ants don't have any difficulty turning left. New research from the University of Bristol has now found rock ants often have one eye slightly better than the other, which could help explain why most of them prefer to turn left, given the choice.

The research, published in Scientific Reports today [Wednesday 11 April] and led by Dr Edmund Hunt and Emeritus Professor Nigel Franks, studied whether rock ants' turning direction was associated with how well the ants can see in either eye. Previous research on honey bees found a link between lateralization to learn odours better with the right antenna, and more smell sensors on the right antenna than the left.

Behavioural lateralization is the preference to use a certain side of the body for certain tasks. For example, most humans are right-handed. While scientists used to think this was only a human trait, evidence for lateralization in animals, including insects like ants and bees, is becoming increasingly widespread. Research by Bristol in 2014 found that rock ants show a leftward turning bias in branching nest sites. While such lateralization may originate in asymmetrical brain structures, it may also relate to external shape asymmetries - such as the size of eyes or the length of legs.

Ant compound eyes are composed of small structures known as ommatidia which collect light. More ommatidia in an eye contributes to better vision. The researchers found that ants turning left tended to have slightly more ommatidia in their right eye, and vice versa. This may be because they prefer to walk with their inferior eye pointing toward the wall, so when they come to a branch they follow the wall along to the left.  This is the first study to report a link between asymmetries in compound eyes and behavioural lateralization in insects.

Dr Edmund Hunt, EPSRC Doctoral Prize Fellow in the Department of Engineering Mathematics Collective Dynamics research group and corresponding author, said: "It is intriguing that lateralization of behaviour seems to be associated with observable external asymmetries in the body. This suggests that behavioural lateralization is something that is 'hardwired' into these animals as they develop rather than something learned through experience. It also shows that physical indicators of lateralization can be externally observable rather than hidden in the brain – and might be awaiting discovery in all sorts of animals."

Theoretical models of behavioural lateralization suggest that population or colony-level alignment of behavioural biases should develop in social species that would benefit from coordinating their behaviour. In this case, more predictable behaviour would help them cooperate. On the other hand, the costs of being more predictable, such as vulnerability to predators, might outweigh this alignment of lateralization in non-social species.

The researchers suggest a comparative study should be carried out on compound eye asymmetry between social and non-social species of insects of the same family, such as honeybees vs. solitary bees, to see if it is more pronounced in social species.