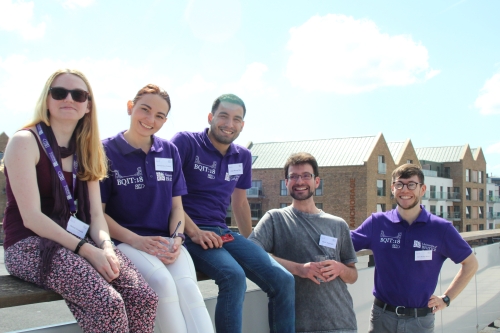 Around 200 quantum scientists, engineers, mathematicians and industrial experts from around the world descended upon Bristol this week for the fifth annual Bristol Quantum Information Technologies (BQIT) workshop hosted by the University of Bristol.

The event, held at the city’s M Shed over three days [18 to 20 Apr], began with an address from QET Labs’ director Professor John Rarity FRS and talks by academics from the University of Bristol and Max Planck Institute on bringing quantum communications into the real world.

These were followed by demonstrations from Microsoft and Zurich Instruments, and talks in solid state physics explored the potential of quantum dots as single photon sources from spin-off company Quandela, as well as academic work from Cambridge, University of Science and Technology of China and Bristol.

Professor John Rarity, said: “Bristol Quantum Information Technologies workshop,  is a venture by the University of Bristol’s QET Labs, whose aim is to deliver a radically new generation of machines that exploit quantum physics to transform our lives, society and economy.”

Quantum cryptography start-up KETS sponsored the prize for best poster, which was awarded to Carmen Palacios Berraquero from the University of Cambridge's for her work on deterministic single photon sources on a chip, with honourable mentions for Bristol's Felipe Ortiz-Huerta and Stasja Stanisic.

The workshop, will close today [20 April], with talks on detectors, simulations, and communications from Delft, Bristol, Oxford and Sorbonne, followed by theory and imaging session from Sheffield, York, Pavia, Glasgow and Sir Peter Knight for the National Physical Laboratory.

We look forward to again welcoming experts from across the globe at next year’s BQIT, set for 3-5 April 2019.

The mission of QET Labs is to take quantum science discoveries out of the labs and engineer them into technologies for the benefit of society.  It brings together £50 million worth of activity that covers theoretical quantum physics through experiment, engineering and skills and training toward concept demonstrators of quantum technologies. Read more on our website: http://www.bristol.ac.uk/qet-labs/

Quantum information and its translation into technologies is one of the most exciting research activities in science and technology today. Long at the forefront of the growing worldwide activity in this area, the Bristol Quantum Information Institute crystallises our research across the entire spectrum, from theory to technology. With our expert cross-disciplinary team, including founders of the field, we have expertise in all major areas of theoretical quantum information science and in experiment. We foster partnerships with the private sector and provide superb teaching and training for the future generation of quantum scientists and engineers and the prototypes of tomorrow. Read more on our website: http://www.bristol.ac.uk/research/institutes/quantum/