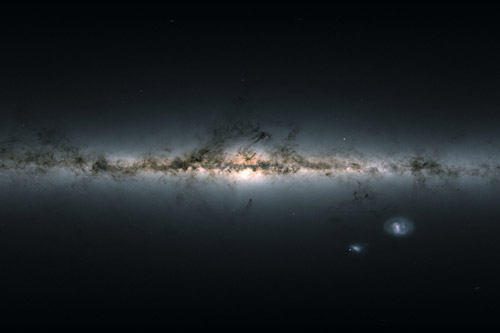 Gaia’s all-sky view of our Milky Way Galaxy and neighbouring galaxies, based on measurements of nearly 1.7 billion stars and displayed in an equirectangular projection. It has been obtained by projecting the celestial sphere onto a rectangle and is suitable for full-dome presentations. The map shows the total brightness and colour of stars observed by the ESA satellite in each portion of the sky between July 2014 and May 2016. Gaia Data Processing and Analysis Consortium (DPAC)

A UK team of astronomers working on the European Space Agency Gaia mission have contributed to a revolution in our understanding of the Milky Way with the release today of a new census of the stars in our sky, thanks, in part, to work by physicists from the University of Bristol.

The detailed information of this census of over one billion stars allows their positions and distances to be mapped to unprecedented precision giving us a true 3-dimensional map of our Milky Way Galaxy.

This new release of information is showing us 600 times more stars than previously available, covering a volume 1000 times larger than Gaia’s own first data release two years ago, with precision some one hundred times improved.

These results allow improved study of almost all branches of astronomy: from traces of the formation of the Solar System; through how stars evolve; through the current structure, the assembly and evolutionary history of the Milky Way; to mapping the distribution of Dark Matter in the Galaxy; to establishing the distance scale in the Universe; to discovery of rare objects.

This second data release allows progress in all these studies by providing not only distances and apparent motions across the sky for 1.3billion sources, but also very precise measurements of brightness and colour for an even larger catalogue of 1.7billion sources.

Seven million stars have their line of sight velocities measured, providing full 6-dimensional – three space positions, 3 space motions – information, determining full orbits for those stars in the Milky Way. This is the information needed to weigh the Galaxy, and determine the distribution – and perhaps the properties – of Dark Matter, the mysterious substance which dominates the mass of the Galaxy and the Universe.

The unique mission is reliant on the work of UK teams at the Universities of Cambridge, Edinburgh, Leicester, Bristol, the Mullard Space Science Laboratory (MSSL) at UCL London and the Science and Technology Facilities Council’s (STFC) RAL Space facility, all of whom are contributing to the processing of the vast amounts of data from Gaia, in collaboration with industrial and academic partners from across Europe.

Professor Gerry Gilmore from the University of Cambridge, UK Principal Investigator for the UK participation in the Gaia Data Processing and Analysis Consortium, and one of the original proposers of the mission to ESA, said: “The combination of all these unprecedented measures provides the information for astronomers to take the next big steps in mapping the formation history and evolutions of stars and our Milky Way Galaxy. There is hardly a branch of astrophysics which will not be revolutionised by Gaia data.

“The global community will advance our understanding of what we see, where it came from, what it is made from, how it is changing. All this is made freely available to everyone, based on the dedicated efforts of hundreds of people. There are so many exciting things to do better with the exquisite Gaia data we anticipate new science papers appearing every day after this release.”

One of the new aspects of the Gaia data released today are radial velocities derived from Gaia spectra. Gaia releases radial velocities for some 7million stars, many times more than have been measured in the history of astronomy up to now, with vastly more to come in future releases.

“Gaia measures huge numbers of individually low-signal spectra – nearly 20 billion separate spectra to date – which must be carefully combined to deliver their full value. This demanding process is worth the effort! The remarkable map of the changing average radial velocity as we look around the sky is direct evidence of the rotation of our Galaxy.”

Dr Floor van Leeuwen from the University of Cambridge has been Project Manager for the UK and European photometric processing work, and is a leading co-author on the example science papers illustrating Gaia’s impact on our knowledge of star clusters and satellite galaxies in the outer Milky Way.

Speaking of the new findings he said: “Groups of dwarf galaxies, including the Magellanic Clouds, can now be observed to be moving around in very similar orbits, hinting at a shared formation history. The accurate observed motions and positions of the globular clusters and dwarf galaxies provide tracers of the overall mass distribution of our galaxy in a way that has not been possible with this level of accuracy before.”

STFC helped the set-up of the data applications centre for the project and STFC’s current support involves the UK exploitation of the scientific data that is now being yielded from the mission. In addition the photometric data processing software to which STFC contributed, as part of the UK-led team, offers the ability to precisely measure the brightness of the billion objects that GAIA is observing, while contributions from the rest of Europe are charting the positions, distances and movements of those one billion stars.

Professor Ian McCrea, Space Physics and Operations Division Head at STFC’s RAL Space said: “Four years into the Gaia mission and it is incredible to see that our work in the UK on developing the photometric data processing software, that precisely measures the brightness of the billion objects that GAIA is seeing, is now successfully giving us comprehensive and detailed information that helps us better understand our true place in the Milky Way, our home galaxy. With this new data release and those that will follow, I am excited to see what new celestial objects, such as extra-solar planets, brown dwarfs, supernovae, asteroids, and of course, things that we have not even imagined have now been recorded.”

UK participation in the mission itself has been funded by the UK Space Agency and scientists and engineers from around the UK played key roles in the design and build of Gaia.

The UK Space Agency has already contributed £15 million to Gaia and is committed to spending a further £4 million on processing and analysing the data. Dr Graham Turnock, Chief Executive of the UK Space Agency, said: “We’re working with industry and academia to support cutting-edge science that will lead to new discoveries about our Galaxy.

“The UK involvement in this exciting mission shows that our academics and engineers are world leaders in the space sector. As part of ESA we will continue to be at the forefront of research and deeply involved in missions such as ExoMars, with its Airbus-built rover, and the BepiColombo mission to Mercury.”

The data collected by Gaia constitutes an enormous dataset on more than a billion stars in the Milky Way, including measurements of their positions, motions, brightnesses, and colours.

The University of Bristol’s work, led by Dr Mark Taylor, from the School of Physics, is providing desktop software that helps scientists sift through all this huge set of numbers to extract scientific meaning.

Dr Taylor said: “We are proud to be contributing to the work of the hundreds of scientists on the Gaia project, and look forward to new discoveries about the way our Galaxy formed, and the properties of the stars that live within it.”

Gaia orbits the sun at a distance of 1.5 million kilometres from the earth and was launched by the European Space Agency in December 2013 with the aim of observing a billion stars and revolutionising our understanding of the Milky Way. During its expected five-year lifespan, Gaia will observe each of a billion stars about 70 times.

A very special aspect of the Gaia mission is that the teams involved do not keep the results for their own science interests. Instead the Gaia data is released with free access to everyone for analysis and discovery.

The UK has been a major partner in the Gaia mission since its proposal, with significant involvement in spacecraft design and construction, especially by Airbus Defence and Space (Stevenage), and through provision of the sensors for Gaia’s billion-pixel camera, by Teledyne-e2v (Chelmsford).

Note: Gaia measures parallaxes and proper motions. Descriptions of these are available.

Fifteen scientific papers describing the data contained in the release and their validation process will appear in a special issue of Astronomy & Astrophysics.

The UK Space Agency leads the UK’s efforts to explore and benefit from space, with responsibility for all strategic decisions on the UK civil space programme. It ensures Government investments in space science and technology deliver significant value to the UK economy and people’s lives.

The UK Space Agency is an executive agency, sponsored by the Department for Business, Energy & Industrial Strategy.