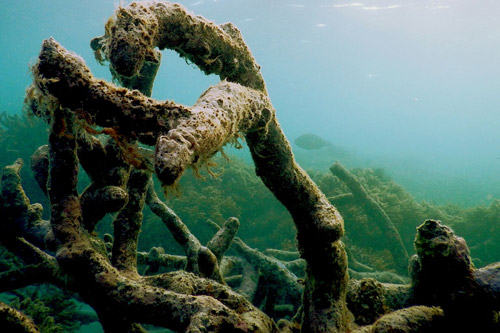 Degraded coral reefs are far quieter than five years ago, and no longer sound like suitable habitat to young fish searching for a place to live and breed, according to research co-authored by the University of Bristol and published today in Proceedings of the National Academy of Sciences USA.

Baby fish looking for a home can use noisy coral reef sounds including snapping shrimp clicks, damselfish chirps, and clownfish chattering to locate and select suitable habitat. But that “coral reef orchestra” has been quietened following recent cyclone and coral bleaching damage on the Great Barrier Reef, raising fears that young fish may no longer hear their way home.

An international team of scientists led by the University of Exeter carried out field experiments on the Northern Great Barrier Reef, and found that reefs sound much quieter and less acoustically diverse than they did before three years of cyclones and coral bleaching. The soundscapes of these recently degraded reefs are less attractive to juvenile fishes, attracting 40 percent fewer fish compared to the sound of previous healthy reefs.

Lead author Tim Gordon, a marine biologist at the University of Exeter, said: “It’s heart-breaking to hear. The usual pops, chirps, snaps and chatters of countless fish and invertebrates have disappeared. The symphony of the sea is being silenced.”

This loss of attractiveness of reef sounds to fish in the sea could have devastating consequences for reefs. Fish communities are instrumental in maintaining healthy reefs, by removing algae, facilitating coral growth, contributing to nutrient cycles and keeping food webs in balance. Damaged reefs with healthy fish populations recover faster than reefs that have lost their fish.

Harry Harding, co-author from the University of Bristol’s School of Biological Sciences, explains: “If fish aren’t hearing their way home anymore, that could be bad news for the recovery prospects of reefs. Fish play critical roles on coral reefs, grazing away harmful algae and allowing coral to grow. A reef without fish is a reef that’s in trouble.”

Coral reef animals produce a dazzling array of sounds to communicate with each other while hunting, to warn each other about the approach of predators and to impress each other during courtship. Together, these sounds combine to form a ‘soundscape’ that can be heard for miles around. This soundscape provides a valuable cue for young fish to locate and select habitat after a period of early development in the open ocean.

Gordon said: “Being able to hear the difference really drives home the fact that our coral reefs are being decimated. Some of the most beautiful places on Earth are dying due to human activity, and it is up to us to fix it.”

Senior author Steve Simpson, Associate Professor in Marine Biology & Global Change at the University of Exeter, said: “Over the last 15 years my research group have discovered how important sound can be for fish to locate and select specific reefs. We have marvelled at the remarkable diversity and complexity of coral reef soundscapes. But in the last few years the reefs we know and love have died before our eyes. And the deserted and crumbling rubble fields have turned eerily quiet.”

Professor Simpson added: “If the reefs have gone quiet, then the chances of the next generation of fish recolonising the reefs are much reduced. Without fish, the reefs can’t recover.”

Warming seas increase the frequency and severity of coral bleaching events worldwide, as higher temperatures cause a breakdown in the relationship between corals and the zooxanthellae that they host in their tissue, providing their energy through photosynthesis. This bleaching recently killed up to 80% of corals in some areas of the Great Barrier Reef, and bleaching events of this nature are happening worldwide four times more frequently than they used to.

Reductions in carbon emissions are needed to reduce this damage, as Gordon explains: “The damage we’ve done to reefs worldwide is horrific, but the fight isn’t over yet. If we can fulfil our international commitments to dramatically reduce carbon emissions, it’s still possible to protect some of the reefs that are left. The time for action is now.”