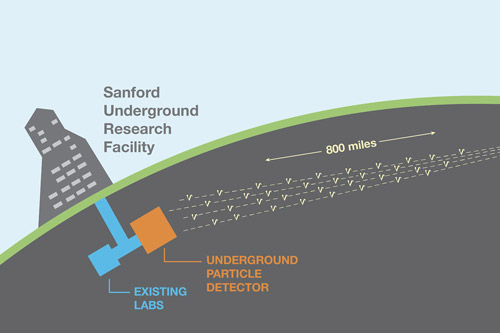 The LBNF neutrino beam will cross 1,300 km underneath the Earth's surface 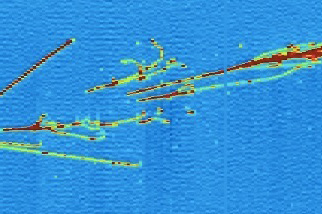 The UK government has announced a £65 million strategic investment in the next generation of particle physics experiments.

LBNF/DUNE is a flagship science project in the United States that will explore the behaviour of neutrinos, and offer a new route to understanding the basic laws of nature.

The University of Bristol leads the effort to capture and record scientific data from the DUNE detector, which will be built a mile underground starting in 2019.

Neutrinos are the most plentiful type of matter in the Universe, but interact with normal materials only very rarely.

The LBNF facility will produce an intense beam of high-energy neutrinos, travelling 1,300km through the Earth’s crust. The 40,000 tonne DUNE detector will intercept neutrinos from the beam, and from natural sources such as the collapse of stars.

Precise measurements of the differences in behaviour between neutrinos and their antiparticles will help explain why there is matter in the universe, one of the key unanswered questions in physics. The laws of physics, as currently written, predict that matter and antimatter should have annihilated each other soon after the big bang.

The investment in LBNF/DUNE is part of a strategic UK-US agreement on science, signed by UK Universities and Science Minister Jo Johnson yesterday.

Dr Jonas Rademacker, leader of the DUNE activity in Bristol, said: "The new investment is amazing news. Bristol has expertise in measuring the properties of antimatter at CERN, but this mega-scale experiment will allow us to also explore the properties of neutrinos. The answers to some basic scientific questions are now within reach."

Bristol is partnering with universities in the UK and worldwide to build and operate the DUNE detector, which will deliver scientific results from the mid-2020s.

The detector will be constructed piece-by-piece in a disused gold mine in South Dakota, where it will be shielded from interference by cosmic rays.

Although Bristol played a central role in the birth of modern physics, with the discovery of the pion 70 years ago, experiments with neutrinos are a new venture for the university.

The giant detector will require electronics and computing technology originally developed for the CERN LHC, where the group has substantial experience.

Professor Dave Newbold, who will lead a consortium of 30 institutes to design and build the data acquisition system for the experiment, added: "DUNE is a brand new type of experiment, which combines amazing precision with huge scale.

"The project is a huge technical challenge, but this new funding will now allow us to start the project in earnest. In just a few years, we will doing beautiful science with some beautiful technology."