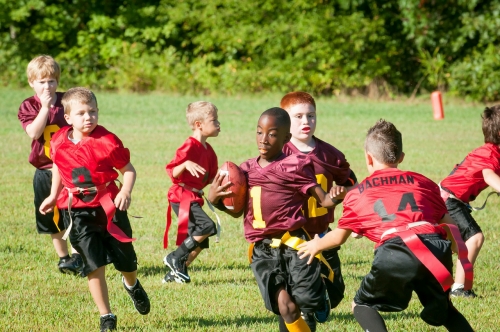 Children who do activity outside of school in addition to during school hours are much more likely to meet the Government’s physical activity guidelines, according to new research from the University of Bristol.

The results, published today in BMJ Open and funded by the British Heart Foundation (BHF), suggest that current efforts to increase exercise during the school day won't be enough for children to meet the recommended one hours of physical activity a day, set by the Chief Medical Officer.

Researchers looked at the time Year 4 children (aged eight to nine) spent doing physical activity outside of school, including after school clubs, playing in the neighbourhood and playing in the home.

The key findings from the study, which looked at 1,223 pupils from 47 state-funded primary schools, were:

To track the children, the team used an accelerometer, a smart device which gives an accurate measurement of movement. They used this to measure mean minutes of moderate to vigorous physical activity (MVPA) and sedentary time every day for a week.

In order to find out what sort of activities were linked to children being more active, the researchers compared the accelerometer results with a questionnaire. Children answered questions on their attendance at organised physical activity in the school or community outside school hours, and neighbourhood play.

The findings point to an alternative to the current efforts to fit additional physical activity into school hours, which have been difficult to implement as a result of the already-full school curricula.

Professor Russ Jago, Professor of Paediatric Physical Activity and Public Health at the University of Bristol, who led the study, said: "This research highlights the importance of physical activity outside of school hours. It is already clear that reaching the recommended physical activity levels solely during school hours is a near-impossible goal.

"Parents should encourage their children to attend after-school clubs, attend community groups and play in their neighbourhood. All four types of activity contribute equally so parents should find the best balance for their children."

Dr Mike Knapton, Associate Medical Director at the British Heart Foundation, which funded the research, said: "Being physically active improves children's health, helps them maintain a healthy weight, aides learning and development, and it also builds social skills. This research should give impetus to parents and teachers to give children opportunities to be physically active throughout the day, whether it’s encouraging them to attend an after-school club or replacing screen time with a run around in the park.

"Habits developed in childhood can last a life time. Encouraging more children to stay active outside of school will undoubtedly improve the future cardiovascular health of our population."

The British Heart Foundation has recently launched the AllStar Games, a brand new high-energy sports fundraising event for schools and communities. It is available for all ages and abilities, and works any time of year, indoors or outside. With a range of sporting activities, from Track and Field events to Egg and Spoon and Fun Runs, along with an easy sponsorship ask, BHF AllStar Games sets up classes, schools or groups to smash it on the day and raise money to keep hearts beating.