Noise pollution found to be disruptive for schooling fish 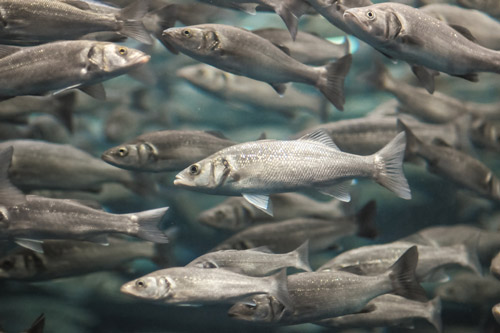 New research from scientists at the University of Bristol has found that noise from human construction projects can disrupt the schools that are so impressive in marine fish.

Human activities, like spreading cities, transport and construction, generate a lot of noise that travels faster in water than in air.

But cohesion and coordination in fish schools are essential in helping some animals avoid predators and exchange information socially.

Recordings of pile-driving, used in the construction of marine infrastructure like windfarms and piers, were played back to small schools of seabass.

450 individual fish were tested in shoals of four individuals each, in the aquarium at the University of Bristol.

The fish became less cohesive and coordinated during the playbacks, compared to when only normal ambient sea sounds were played to them.

Dr Christos Ioannou from the University’s School of Biological Sciences, said: "By using state-of-the-art computer tracking software, we were able to measure and analyse the movement of individual fish and the shoal as a whole in great detail.

"This is one of the few studies to explore how pollution from human activity impacts schooling behaviour in fish.

"Previous work has mostly focused on the effect of noise on the physiology and behaviour of individual animals."

The changes in the fish’s behaviour when exposed to noise suggests they may be more susceptible to predators, as schooling behaviour is so useful in avoiding being eaten.

Now changes due to noise are established in the lab, the next step is to test this under natural conditions.

The findings are reported today in Proceedings of the Royal Society B. and was funded by the UK’s Natural Environment Research Council (NERC).

‘Anthropogenic noise pollution from pile-driving disrupts the structure and dynamics of fish shoals’ by J.E Herbert-Read, L. Kremer, R. Bruintjes, A. Radford and C. Ioannou in Proceedings of the Royal Society B.