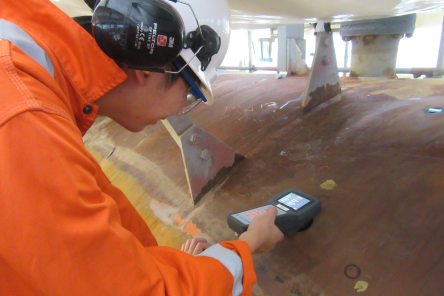 Inductosense, a University of Bristol spin-out which is developing novel ultrasonic sensors for monitoring corrosion, cracks or defects in structures has secured a funding round of £1.1million investment from a consortium of investors.

Inductosense is developing the technology behind a WAND - Wireless And Non Destructive system that works by bringing a measurement probe near to a compact, battery-free sensor installed on a structure. What makes it unique is that the sensors are small, passive and wireless and can therefore be permanently attached to structures, even if the structures are beneath a layer of material or coating. The benefits to Inductosense’s clients are a significant reduction in cost and downtime associated with conventional monitoring.

The technology was developed over several years by Dr Chenghuan Zhong, Dr Anthony Croxford and Professor Paul Wilcox from the Ultrasonics and Non-Destructive Testing Group at Bristol’s School of Civil, Aerospace and Mechanical Engineering. In 2015, Inductosense was formed with funding from InnovateUK alongside angel investment. Since then, the team has launched the system for measuring internal corrosion on pipework and secured orders. They are working with a number of major companies on trials with an initial focus on monitoring assets across oil and gas and nuclear.

Dr Matt Butcher, CEO at Inductosense, said: “Over the past year we have had great success in development of the technology and commercial traction. With the investment, we want to accelerate our pace and progress from trials to commercial deployment of sensors. We are also commercialising some exciting new products.”

Stephen Tetlow MBE, Chief Executive of the Institution of Mechanical Engineers, announcing the investment, added: “It is exciting that we can support cutting-edge technologies, like those being developed by Inductosense that are, in George Stephenson’s words, ‘likely to be useful to the world’. The Institution wants to help companies overcome the hurdle between research and development and bringing a product to market, and apart from the monetary investment, this will also connect Inductosense to the vast resources and network of the Institution and its membership.”