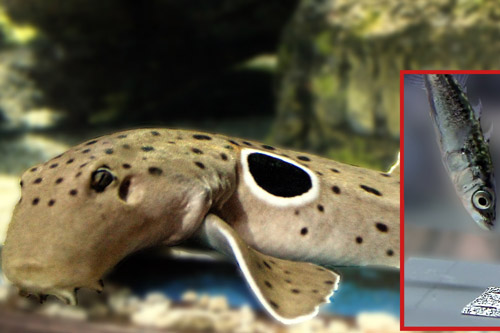 An example of a fish (Hemiscyllium ocellatum) having two large eyespots, one behind each pectoral fin. Inset: A stickleback hesitates to attack eyelike patterns. Karin Kjernsmo

The widespread occurrence of eyespots, from butterflies to fish, has intrigued biologists for years but the mechanism behind their function has, until now, remained unclear.

New evidence published recently in The American Naturalist shows that prey eyespots intimidate predators because they associate the eyelike appearance of eyespots with the threat posed by their own enemy.

Eyespots are enigmatic marks that are often found on prey species. To humans at least, these concentric circle markings often bear a resemblance to the vertebrate eye, such as those of an owl.

One enduring theory of their function has been that they mimic the eyes of a predator’s own predator and thus produce an intimidating effect. However, even though we may think that eyespots resemble staring eyes, evidence has been lacking as to whether other creatures make the same association.

Researchers at Åbo Akademi University in Finland conducted an experiment in which artificial prey with different marks were presented to three-spined sticklebacks, a small species of fish, half of which had been exposed to the presence of their natural enemy, a larger fish.

Dr Sami Merilaita, one of the two researchers involved in the project, said: "The challenge has been to find a way to tell what comes to the mind of an attacking predator when it sees an eyespot.

"The problem has been that it is difficult to tell whether predators react to eye-likeness or some other property of the mark. The solution came with the realisation that even though eyespots may resemble eyes, not all views of animal eyes always resemble eyespots."

Most of the previous research on eyespots has been conducted on small birds and their prey, typically butterflies or moths that have eyespots.

Dr Karin Kjernsmo, now based at the University of Bristol’s School of Biological Sciences, added: "By conducting the study in an aquatic environment, we were able to decouple the eyespot-like appearance from the eyelike appearance.

"If you consider the stare of a fish that has its eyes on the sides of its head, from the front it looks quite different from eyespots, while still being eyelike. At the same time when viewed from the side, a fish eye does resemble the normal round and concentric eyespot pattern.

"Therefore, we presented fish with artificial prey that displayed an image of their predators’ eyes from different angles making them eyespot-like or not (but always eye-like).

"We found that compared to the predator-unexperienced fish, the fish that had experienced predation threat were more hesitant to attack the prey with the eye-like marks, even when they were not eyespot-like.

"This is strong evidence that the fish associated the eyelike appearance of the mark with the threat imposed by its own enemy."

‘Resemblance to the enemy's eyes underlies the intimidating effect of eyespots’ by K. Kjernsmo and S. Merilaita in The American Naturalist