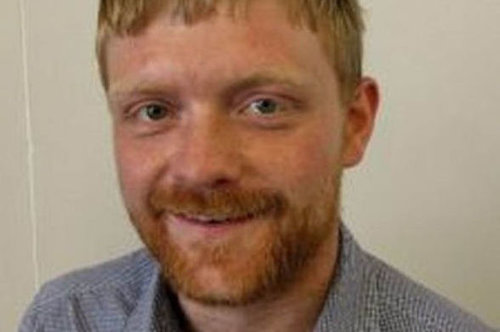 Research Associate Dr Robert Allen died under tragic circumstances on 4 September, alongside his 21-year-old brother Charles, while they were both fishing on rocks near Treyarnon Bay, North Cornwall. Professor Ian Bond, Head of School, offers this remembrance.

Dr Robert (Rob) Allen, was a Research Associate in the Advanced Composites Centre for Innovation and science (ACCIS), a world leading research group within the School of Civil, Aerospace and Mechanical Engineering, before he moved to the University of Bath in 2016.

Rob moved to Bristol in 2013 after completing his PhD in nanocomposite materials at the University of Exeter. He was initially employed as a Research Assistant, but his talent for adapting 3D printing techniques to make novel structures using unconventional materials saw him quickly progress to Research Associate. In early 2016, Rob moved with Professor Richard Trask to the University of Bath, to help him build a new research group to develop 4D materials.

During his time working in ACCIS at Bristol, Rob had a significant impact on those around him, as he became the ‘go to’ guy for any help on exploiting 3D printing techniques. His colleagues reflect below on his expertise, friendship and positive outlook on life.

“I'd like to highlight just how brilliant he was at fine tuning fused filament printers and materials. He had an amazing intuition for how to play with all the different settings to get parts that both looked great and were functional, which just isn't the case for most 3D printing. This was a skill that he had developed from what must have been thousands of prints; it was clearly something that he loved. I remember going to his talk at an international conference in Copenhagen in 2015. He went way over time, but it was the last talk of the day and no one seemed to mind because everyone was really into it. The talk was much more than just a discussion of his research results. Although unconventional in his style, his enthusiasm for the topic really came through, leaving the audience in no doubt of his passion for and ability in 3D printing.” Dr Michael Dicker

“Rob worked with me on two projects where we needed to 3D print structures inspired by bone for testing, and public display. His enthusiasm for the technology was infectious, and we spent many hours poring over data files, tweaking models, and planning ever bigger and more complex prints. He worked out of hours to give my PhD students and postdocs help and training, and told me with a smile that his job was his hobby. He was patient, great at engaging with children and young people in public outreach events, and very tenacious. I never saw him give up on a problem. It was a huge pleasure to get to know him, and work with him, and I will miss his friendship, expertise, and dry sense of humour enormously.“ Professor Kate Robson-Brown

“As a PhD student working in the field of 3D printing smart materials, Rob was always willing to help and share his knowledge regarding 3D printing. Even after his move to Bath he was still willing to help and respond to my queries via email, even though he didn't have to do it. To me this was a very kind gesture on his part and showed his great generosity.” Manu Mulakkal

“I had the privilege of working with him on an extension of my project ‘Novel Bio-inspired Body Armour Developed Through Additive Layer Manufacturing’. He always had a smile on his face, regardless of the situation, had a great sense of humour and was always up for a brief chat. He was always willing to help and suggest new ideas or directions even if your work wasn’t connected to his. He was incredibly modest about his own abilities and achievements despite producing some amazing 3D printed samples for the project we were working on together. He will be sorely missed.” Ian Gent

“I worked with Rob at various points throughout my PhD and he played an instrumental part in my move into exploiting 3D printing. He was always willing to give me honest advice on the direction I was taking with the research, didn’t mind me bombarding him with numerous 3D printing questions and never complained about having to fix my broken 3D printer on many occasions, in fact I think he enjoyed it! He was always a very happy person to be around and will be greatly missed by myself and everyone he worked with.” Isabel Qamar

As is clear from the testaments above, Rob was a good colleague, a good friend and a good man, and all of us who had the great privilege of working alongside him are deeply saddened by his tragic passing.