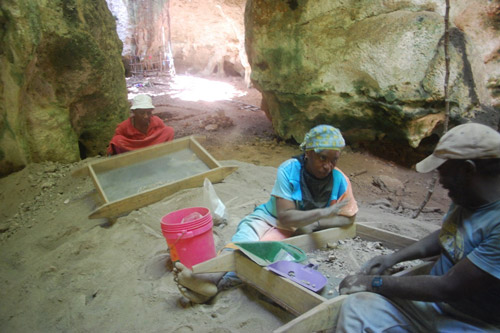 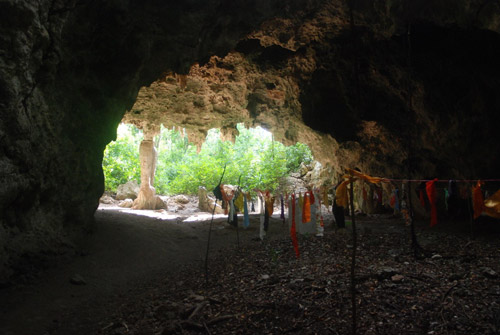 Kuumbi Cave, Zanzibar where human remains from 1400 years ago were found and provided well-preserved ancient DNA for the study Mark Horton 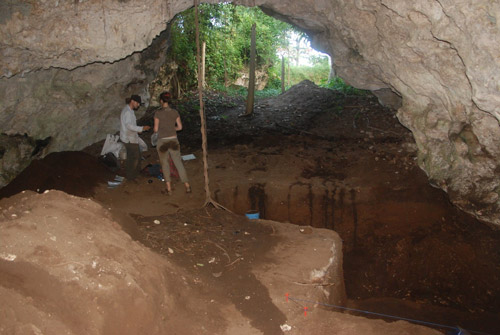 Samples of ancient DNA recovered by University of Bristol scientists on two Indian Ocean islands have helped in the first large scale study of ancient human DNA from sub-Saharan Africa.

Africa has long been known as the 'cradle of mankind', but up to now, the genetic information has been largely derived from modern population studies.

Ancient DNA was extracted from the remains of 16 individuals from 12 locations, ranging from Ethiopia, Kenya, Tanzania, Malawi and South Africa and dating to between 8,100 and 400 years before present.

All the remains were presumed to belong to the late Stone Age hunter gatherer/forager populations, that lived in the region before the spread of agricultural societies from the north and west.

Excavations in the Zanzibar archipelago (Tanzania), during 2012, undertaken by Professor Mark Horton of the University of Bristol's Department of Anthropology and Archaeology,  and a co-author of the paper, with colleagues from the Max Planck Institute for the Science of Human History, recovered remains of three individuals from two caves.

The first, Kuumbi Cave, has a sequence of occupation dating back 30,000 years. The individual, a female, was however only 1,400 years old. In the second, Makangale Cave, on Pemba island, two individuals were discovered, one contemporary with the Kuumbi sample and a second only 600 years old.

Professor Horton said: "These DNA results are important in understanding how the East African islands were populated in prehistory and whether these hunter-gathers had access to maritime technology."

Pemba has been an island since the Miocene, so this population reached the island by boat, while Zanzibar has been an island for at least 8,000 years, and while the population could have been a survival from this earlier period, this seems unlikely. Both islands lie around 30 miles off the mainland of Africa.

Although ancient-DNA research has revealed insights into the population histories of many areas of the world, delving into the deep ancestry of African groups was not possible until recently because genetic material degrades too rapidly in warm, humid climates.

This new analysis was led by Dr David Reich of Harvard Medical School, in collaboration with Ron Pinhasi of University College Dublin and the University of Vienna and Johannes Krause of the Max Planck Institute for the Science of Human History and the University of Tübingen in Germany. Technological advances—including the discovery by Pinhasi and colleagues that DNA persists longer in small, dense ear bones—are now beginning to be explored.

The researchers compared these ancient genomes—along with the only other known ancient genome from the region,previouslypublished in 2015—against those of nearly 600 present-day people from 59 African populations and 300 people from 142 non-African groups.

Dr Reich said: "The last few thousand years were an incredibly rich and formative period that is key to understanding how populations in Africa got to where they are today. Ancestry during this time period is such an unexplored landscape that everything we learned was new."

Among the ground breaking discoveries included evidence for widespread hunter-gatherer population that spanned from the southern tip of Africa all the way to the equator about 1,400 years ago that have contributed very little to the modern populations, in the region.

That mysterious group shared ancestry with today's Khoe-San people in southern Africa and left DNA traces in the Late Stone Age populations of Zanzibar and Pemba.

When agriculture spread in Europe and East Asia, farmers and animal herders expanded into new areas and mixed with the hunter-gatherers who lived there. Present-day populations thus inherited DNA from both groups.

The new study has found evidence for similar movement and mixing in other parts of Africa, but after farmers reached Malawi and Pemba island, hunter-gatherers seem to have disappeared without contributing any detectable ancestry to the people who live there today.

Dr Reich added: "It looks like there was a complete population replacement. We haven’t seen clear evidence for an event like this anywhere else."

It required 'squeezing water out of a stone' because they were working with so few ancient samples, said Reich, but Pontus Skoglund, a postdoctoral researcher in the Reich lab and the study’s first author was able to identify two regions of the genome that appear to have undergone natural selection in southern Africans.

The researchers hope the study encourages more researchers to investigate the diverse genetic landscape of human populations in Africa, both past and present. Reich also said he hopes the work reminds people that African history didn’t end 50,000 years ago when groups of humans began migrating into the Near East and beyond.

Dr Reich added: "The late Stone Age in Africa is like a black hole, research-wise. Ancient DNA can address that gap."

There were 44 total study authors from institutions in 11 countries.

This news release has been adapted from an article written by Stephanie Dutchen at the Harvard Medical School Office of Communications and External Relations.