Fathers with learning disabilities 'left out of support', study finds 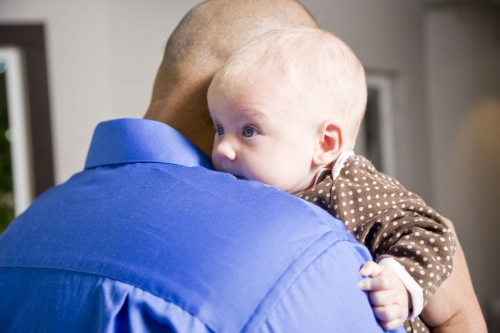 Fathers with learning disabilities are often let down by statutory services, which neglect to support them around parenting or focus only on mothers, a study has found.

The research, undertaken by the University of Bristol's School for Policy Studies, drew on interviews with both fathers and adult social care practitioners.

It found that the lack of support for fathers with learning disabilities – many of whom had already experienced difficult lives – exacerbated stresses they experienced around parenthood, in some cases contributing to serious mental illness.

The study, funded by the NIHR School for Social Care Research (NIHR SSCR), concluded that learning-disabled fathers need to be much better included in family-focused social care practice in order for their needs to be met and their children to flourish.

It recommended that adult social care services identify fathers at the point of referral and discuss with them how to best support them with the practicalities of parenthood.

The University of Bristol's Dr Jon Symonds, who led the research alongside his colleague Dr Daryl Dugdale, said: "The fathers we spoke to really wanted to be included in support to help them fulfil their role as loving parents to their children.

"Practitioners can support fathers with learning disabilities in the same way they do mothers – by including them in conversations about being a parent, and offering emotional, as well as practical support with parenting tasks."

Interviews carried out with eight fathers aged between 26 and 60 revealed that most had endured difficult childhoods featuring bullying and discrimination, a lack of encouragement from others and unhappy relationships with their own fathers. "My real dad thought me, the only son, a let-down because I've got a learning disability," said one.

Several of the men spoke of the importance of defying others' low expectations of them in relation to work – where opportunities were limited – and starting a family. As fathers, interviewees described taking part in a wide range of activities with their children – but they also mentioned challenges around tasks such dealing with bills or school letters, and with keeping calm around their children.

Four men highlighted the impact such challenges had had on their mental health (three of them having been admitted to psychiatric hospitals), which placed further strain on their parental relationships. Where men had felt supported in their roles as fathers, meanwhile, this had mostly come from female family members or from advocacy groups.

The fathers said that they had received little statutory support around parenting from adult social services, which focused on housing, finance and independent living. The men viewed children's services as being motivated mainly by safeguarding concerns – and interventions in any case tended to target support towards mothers.

The men's viewpoints were backed up by interviews with nine adult social care practitioners, who acknowledged that fathers were not routinely engaged by services. There was little awareness of an eligibility outcome in the Care Act 2014, relating to adults' caring responsibilities for a child, and most practitioners viewed support around parenting as the domain of children's services.

Yet the practitioners also tended to see children's services interventions as being inappropriately focused on the short-term. A rare example of successful practice around fathers with learning disabilities was provided by a manager who had experience of both children's and adults' social work, and so was able to negotiate support across both systems.

"This study raises important implications for support for fathers with learning disabilities, and highlights the need to coordinate support for these fathers across adults' and children's services."

Fathers with learning disabilities and their experiences of adult social care services [PDF] can be read on the NIHR School for Social Care Research's website.