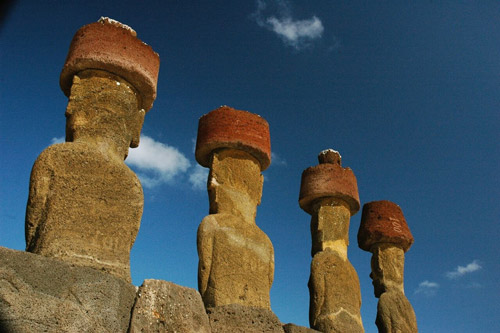 The ceremonial Ahu platform at Ahu Nau Nau in Anakena, where the human remains analysed were discovered. Terry Hunt

Easter Island has long been a source of intrigue and mystery. How did such a small community of people build so many impressively large statues?

And what happened to cause that community to collapse? Researchers have also been curious about what kind of contact the Easter Islanders might have had with South Americans prior to the arrival of Europeans.

But a new study, co-authored by an archaeologist from the University of Bristol, of ancient DNA evidence collected from archaeological samples and reported in Current Biology now calls those findings back into question, finding no evidence that ancient inhabitants of Easter Island intermixed with South Americans.

Lead author, Lars Fehren-Schmitz of the University of California, said: “While the findings can’t exclude the possibility that cultural contact took place between the two populations, if those long-distance treks across the ocean were occurring it did not leave genetic traces among the individuals samples.

“We were surprised that we didn’t find any Native American admixture in our ancient Rapa Nui specimens.”

The idea that there had been early Pacific contact with South America, or even that a Southern Pacific migration route contributed to the peopling of the Americas has been a long-standing debate in the field.

In the new study, the researchers wanted to find out what DNA from ancient Rapa Nui samples had to say on the matter.

The researchers including Cat Jarman, from Bristol’s department of Anthropology and Archaeology, and Pontus Skoglund of Harvard Medical School sequenced DNA from five individual samples representing Rapa Nui both before and after European contact.

They report that the DNA, including both complete mitochondrial genomes and low-coverage autosomal genomes, indicate that the DNA of those individuals falls within the genetic diversity of present-day and ancient Polynesians.

Cat Jarman said: “This new research shows how state-of-the-art scientific techniques can now start to really answer questions we have been asking for a long time. Interdisciplinary research is key to this and our project included archaeologists, geneticists, and geochemists.

“But the DNA results also demonstrate the importance of understanding more recent population dynamics if we are to untangle more distant historical events.

“For the Rapa Nui population, slave trade and colonial ventures had devastating effects. Our paper suggests that this is the cause of the difference between modern DNA analyses, which showed South American admixture, and our study, which did not.

“This has important implications for reconstructing migration and population movement elsewhere in the world as well. The huge advancements in ancient DNA analysis -- my colleagues at UC Santa Cruz were able to extract genome-wide data from very small fragments of poorly preserved human bone -- will significantly add to this in the future.”

Lars Fehren-Schmitz added: “We can reject the hypothesis that any of these individuals had substantial Native American ancestry.

“Our data thus suggest that the Native American ancestry in contemporary Easter Islanders was not present on the island prior to European contact, and may thus be due to events in more recent history.”

The new study highlights the value of ancient DNA for testing hypotheses about the past. It’s clear from earlier evidence that living Rapa Nui do have a small proportion of Native American ancestry. But, the researchers on the new study say, it is “especially difficult to disentangle movements of people in the prehistoric period from more recent times.” The question remains: how and when did this population exchange happen?

The researchers say they’d now like to generate genome-wide data from additional ancient Oceania and Western South American populations. The goal is to develop a more detailed picture of the population dynamics of these regions and potential interactions between them.

‘Genetic Ancestry of Rapanui before and after European Contact’ by L. Fehren-Schmitz, C. Jarman, K. Hawkins, M. Kayser, B. Popp and P. Skoglund in Current Biology