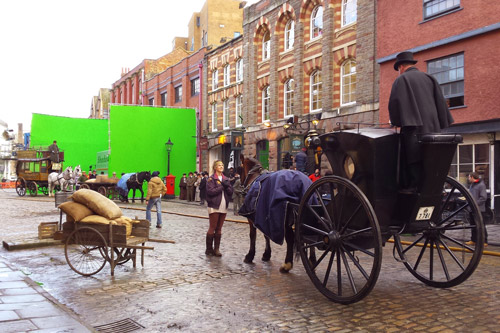 The University of Bristol has welcomed today’s exciting news that Bristol has been named a UNESCO City of Film.

The announcement by the Director-General of UNESCO (United Nations Educational, Scientific and Cultural Organisation) made this morning confirmed that Bristol has succeeded in its bid and will join the likes of Sydney, Galway, Rome and Bradford as a City of Film.

Manchester will also take its place alongside Bristol as part of the Creative Cities Network as it has been named a UNESCO City of Literature.

The UNESCO City of Film bid process began in 2016. Bristol’s application was put together under the guidance of a management group comprising Bristol City Council, Bristol Film Office, University of the West of England (UWE Bristol), University of Bristol, Screenology, Destination Bristol and Bottle Yard Studios.

Deputy Vice-Chancellor & Provost at the University of Bristol, Professor Guy Orpen, said: “Bristol's City of Film status is very exciting news. It recognises Bristol's role in the past, present, and future of the moving image.

“The University of Bristol will now be able contribute to and benefit from our partnership in the City of Film and its activities across teaching, research, diversity & inclusion, civic engagement and creative industry partnerships across the city and beyond.”

Parliamentary Under Secretary of State for Arts, Heritage and Tourism at the Department for Digital, Culture, Media and Sport, John Glen MP said: “This is fantastic news for both Bristol and Manchester and recognition of their global significance to film and literature. This UNESCO designation will enhance their reputation around the world and help forge strong partnerships with other nations.

Marvin Rees, Mayor of Bristol, said “This is fantastic news and a ringing endorsement of Bristol’s position as a world leader in film production, education and training. Our reputation as a diverse and creative city has long helped to attract productions and talent across film, TV drama, animation and of course natural history. I hope this recognition will be a catalyst for bigger opportunities for the city and Bristolians to showcase Bristol as a centre for film.

“Bristol’s cultural sector is a diverse industry that plays an important role in breaking down the barriers inequality creates. Our ambition is that the education, training and employment opportunities developed by the sector will benefit all communities across Bristol and being named as an UNESCO City of Film is a step towards meeting this goal.”

The bid included the input of leading lights from across the city’s film and TV sector from production, education, screen heritage and exhibition, including Watershed, Knowle West Media Centre, Calling The Shots, Aardman Animations, BBC Bristol, Encounters Festival, Bristol Festivals and many more.

It is a designation for the city and not a single year award meaning that Bristol will be known as a city of film for many years to come.

The city also offers a designated Film Office service supporting all types of production, provided by Bristol City Council and is home to The Bottle Yard Studios (also a Bristol City Council initiative), the largest dedicated film and TV studio facility in the West of England, an epicentre for production in the region with a large creative hub of facilities companies.

A recent report revealed that around 3,700 people are employed by independent film & TV companies in the Bristol region working in specialist sub clusters of natural history, animation, factual, post-production, corporate and facilities. £140.3 million was generated by the sector in 2016.

In 2016/17, Bristol Film Office registered a total of £18.3 million inward investment generated by film and television production and a 30 percent rise in number of productions assisted to shoot in the city.

Dr Angela Piccini, from the University of Bristol’s School of Arts, was the university’s representative for the project and co-wrote the bid with partners, outlining the institution’s potential participation by the Departments of Film & Television, Anthropology & Archaeology, and Theatre and the Faculty of Engineering and Bristol Vision Institute.

She added: “UNESCO City of Film status attempts to draw together all of the diverse film, television, and screen media activities across the city - from silent film to virtual reality.

“The University of Bristol teaches and researches across moving image forms in many Faculties, far beyond the Department of Film and Television and Faculty of Arts - from medical imaging, to computationally driven innovation to the politics and power of media representation to the aesthetics of industry-facing practices.

“From Cary Grant to Knowle West TV to the BBC to Aardman and the latest Virtual Reality and imaging research, the City of Bristol has been at the forefront of moving image innovation and the creative industries. We are all really looking forward to carrying out the action plan!”

Over recent years, the University of Bristol has provided locations for TV and film productions including Dr Who, Sherlock, The Lost Honour of Christopher Jefferies and Casualty.