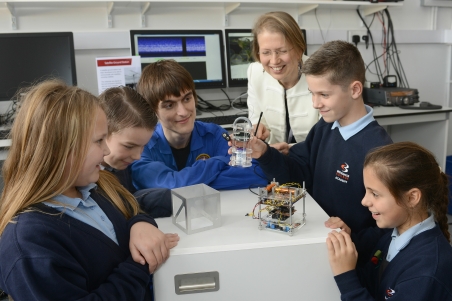 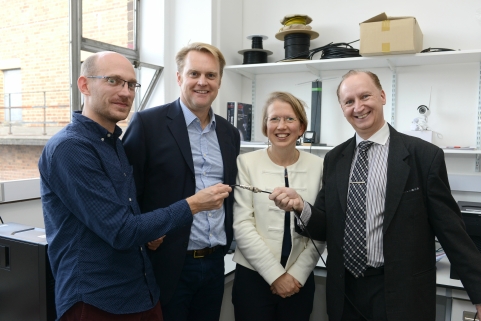 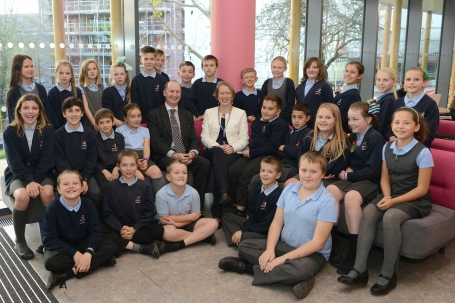 Space exploration in Bristol is to be boosted thanks to the opening of a new satellite laboratory and ground station at the University of Bristol today [10 Nov]. The fully automated ground station, equipped with the latest tracking technology, will allow students and researchers to speak with astronauts in NASA’s International Space Station, download data from current satellites in orbit, and communicate with future University of Bristol-built satellites.

The state-of-the-art satellite laboratory will enable University of Bristol students to work on their own space missions by building and testing new satellites. Currently they are working on a UK Space Agency-funded project for a volcano monitoring satellite that will observe volcanoes from space and take images of ash clouds.

A ribbon-cutting ceremony by the Dean of Engineering, Professor Andrew Nix, will mark the official opening, this will be preceded by talks given by BBC Two Astronauts: Do you have what it takes? finalist, Tim Gregory, and Spacecraft Systems Lecturer and joint director of the new facility, Dr Lucy Berthoud.

Dr Lucy Berthoud from the Department of Aerospace Engineering and Chair of Space Universities Network (SUN), said: “We are very excited. Having these unique facilities will allow Bristol to increase its opportunities in space research as well as educate the next generation of space scientists and engineers. We also plan to use them outreach activities in Bristol schools and museums.”

Dr Mark Schenk, Lecturer in the Department of Aerospace Engineering and joint director of the laboratory, explained: “The laboratory will provide students with real-life space missions to work on and enable our researchers to develop new space instruments and technologies.”

Professor Andrew Nix, Dean of Engineering, added: “We are thrilled to be the only University in the region to have this state-of-the-art satellite laboratory and ground station.  The facilities will support space opportunities at Bristol. The project’s aim is to develop and operate a series of satellites to add exciting challenges to the student experience, to increase employability through cross disciplinary teamwork, and to unite different academic disciplines and student societies with an interest in space.”

The new lab and ground station has been created with support from Boeing.

About Dr Lucy Berthoud
Lucy Berthoud is a senior lecturer in Space Systems in the Civil, Aerospace and Mechanical Engineering School at the University of Bristol. She has a PhD in Space Physics from ENSAE, Toulouse and a degree in Mechanical Engineering from University of Bristol. Dr Berthoud has worked in the Space Industry for twenty years on interplanetary spacecraft missions to Mars, Venus, Mercury, Moon and comets. Previously she was a visiting scientist at NASA Johnson Space Center in Houston looking at planetary cratering and at the European Space Agency in Holland investigating space debris.

About the satellite ground station
The satellite ground station is a fully automated satellite tracking station operating in amateur radio frequencies UHF and VHF. The UHF and VHF antennas are mounted on the roof of the Queen’s Building and will be used to have radio conversations with the International Space Station, download telemetry from current satellites in orbit, perform a “Moon Bounce” with other amateur radio stations, and most importantly, communicate with the UoBSat when it is launched into orbit. The University of Bristol is forming partnerships with other Universities to provide ground station support for University satellites in Low Earth Orbit.

A team of students and staff from the University of Bristol are designing a volcano monitoring satellite as part of the University's satellite programme, The project, initially funded by the UK Space Agency, will take several years to complete.  Once designed and built, the new satellite will observe volcanoes from space and take 3D images of ash clouds, see press release issued 21 June 2017.