The economic impact of the UK’s leading research-focused universities, including the University of Bristol, has been revealed in a major new study.

A report from the Russell Group has found its 24 member universities are injecting nearly £87 billion into the national economy every year on aggregate – the equivalent of eight months’ UK-wide expenditure on the NHS.

The £86.8 billion figure is contained in a new study on the short, medium and longer-term impact of Russell Group universities by the respected economic research consultancy, London Economics.

While it doesn’t break down the data for each university, a previous study commissioned by the University of Bristol and carried out by Oxford Economics showed that the University, its students and their visitors contributed £721.2 million to the West of England region[1] in 2014/15.

In addition to the financial impact of its staff and students to the region, the University’s research is estimated to have contributed over £1.16 billion to the UK economy in 2015/16[2].

Furthermore, one in every 49 jobs in the area is dependent on the University’s existence to some degree. It employs over 6,000 people, which is more the number of people employed by all the GP practices across the whole of the LEP area (5,300 people) and is about twice as large as the entire Bristol Airport workforce.

Professor Hugh Brady, Vice-Chancellor and President of the University of Bristol, said: “The findings from the Russell Group, coupled with our own research, highlight the importance of research-intensive universities such as Bristol. We are proud to play such a vital role in the region’s economy, driving growth and innovation.

“Aside from our economic impact, it’s important to remember that higher education institutions contribute in many other ways which are difficult to quantify using standard metrics.

“It’s clear that, in the future, cities are unlikely to thrive without the social, cultural and economic impact of world-class universities.”

In addition to their financial contribution, Bristol students drive inward investment, volunteer in the community, set-up businesses, support the city's hospitality and retail sectors, cultural organisations and sporting activities, and play a huge role in making the city such a vibrant and creative place.

The University's staff are also important contributors to Bristol's cultural, sporting and non-profit sectors. They are intimately involved in the city's wider educational activities through leadership roles within schools and the Bristol Learning City partnership, as well as access and participation programmes such as Into Bristol, Access to Bristol and Bristol Scholars.

Authors of the Russell Group report calculated the impact of the 24 universities’ teaching and learning activities, their world-renowned research, their spending on goods, services and people, and their value as a major exporter through the income generated from overseas students.

The total economic impact calculations are based on a snapshot of a single academic year 2015/16. 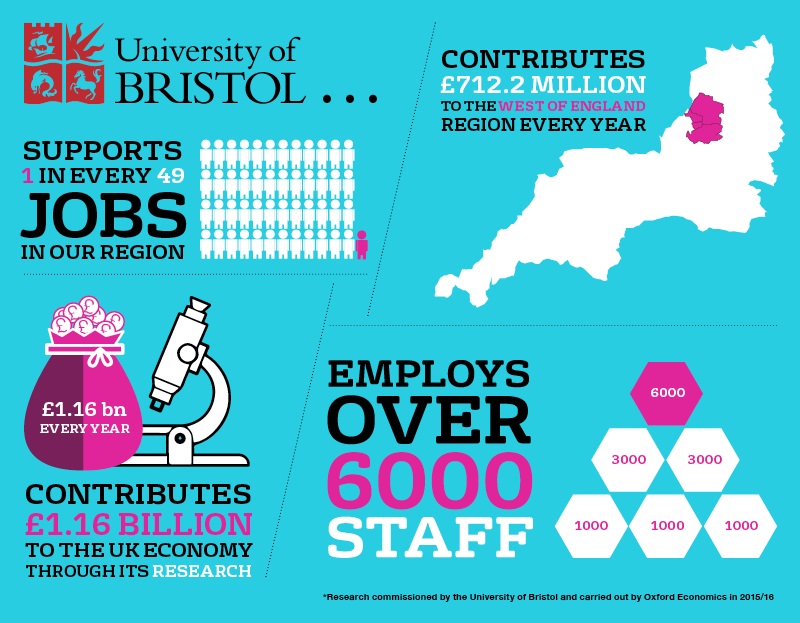 Among the key findings in its report are:

[1]   The West of England is the Local Enterprise Partnership for Bath and North East Somerset, Bristol, North Somerset and South Gloucestershire. The LEP covers an area with a population of over 1.1 million people and economic output of over £29 billion.

[2] Calculations based on the same methodology used in the Russell Group’s report.