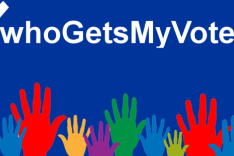 A new, interactive website launched this week to help voters in the upcoming UK general election determine which party policies they most closely identify with. The online voting advice application, called WhoGetsMyVoteUK, is part of a collaborative project led by Oxford Brookes, involving researchers from Queen Mary University of London and the University of Bristol.

Users of WhoGetsMyVoteUK respond online to a questionnaire with a series of policy statements stating to what extent they agree with them. It then produces the results in a number of graphical displays providing users with information including how close they are in terms of policy preferences to each party, how close they are to each party on a number of ideological scales, and how other users who answered the questionnaire in a similar way to them intend to vote.

Lecturer Dr Jon Wheatley, from the Department of Social Sciences at Oxford Brookes University said: “WhoGetsMyVoteUK has been designed to be a useful tool to help voters see where they stand relative to the main political parties and which policies they have a preference for; ultimately making it easier for users when making their own choice on how to vote in the general election on 8 June.

“The more questions the user answers, the better insight the tool will be able to provide on their positioning on the political landscape. Every party is coded by at least three expert coders on an interactive platform in which clear evidence for each party's position must be presented. This makes the party codes far more reliable than those of competitors.

“In the long run we hope to generate a lot of data from use of this tool which will prove key for future research on voter alignments in an age of globalisation and the use of these types of online voting tools. It will also provide us with extensive data to make a longitudinal study around ideological dimensions, particularly whether pre and post Brexit, the traditional Left-Right dimension is still relevant.”

Dr Neil Matthews, Lecturer in British Politics at the University of Bristol, said: “The WhoGetsMyVoteUK app is meant to both fun and informative. It focuses on just one reason to vote: which party you are closest to on policy matters. If users would like a clear picture and systematic measurement of where the parties sit, and where they sit, in ideological space then they will find it useful.”

WhoGetsMyVoteUK can be accessed from a computer or mobile device by visiting www.whogetsmyvoteuk.com

It does not collect any personal identifying information and all data is anonymous.