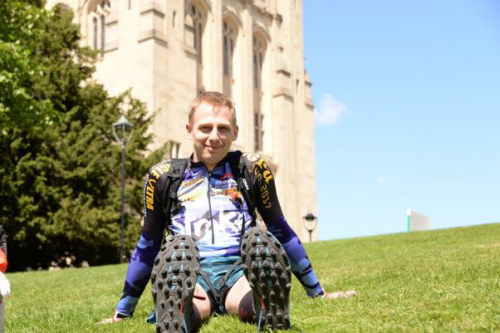 Martin Mienczakowski is taking part in a seven day, six-stage, 230km race through the Jungles of Peru

A Bristol stroke survivor is preparing to tackle a seven day, six-stage, 230km race through the Jungles of Peru, to raise vital funds for the Stroke Association.

Research Assistant, Martin Mienczakowski, 33, from Clifton, set a new world record last year by travelling almost ten miles on a space hopper raising over £1,300 for the Stroke Association. Now he's off to the Amazon rainforest to run the Jungle Ultra in aid of the charity on Sunday 4 June.

Martin had a stroke on Christmas Day in 2009. At the time of his stroke, Martin was ringing the church bells at his local Christmas service when he began to feel ill. Thinking he was having a migraine Martin decided to drive back home to his parents’ house, where after a couple of hours he was rushed to hospital.

Martin said: "Stroke has had such a huge impact on my whole family. I’m not the only stroke survivor in my family; after my stroke in 2009, my Grandfather and Father have both also had strokes. For me, my recovery has been extremely emotional. I experienced depression and anxiety which I feel has been the major barriers to my recovery.

"During my recovery I was confronted with a number of things that people said I wouldn’t or shouldn’t be able to do again, like going back to work full- time for example. In overcoming these hurdles I have had to develop a philosophy of working out how I can do things, rather than dwelling on why I can’t do them. Since my stroke I have represented England in a new sport, completed a wilderness walk, written a book, and set a new world record.

"The Ultra Jungle is going to be a huge challenge. I’ll be up against humidity levels reaching near 100%, virgin forests and, diverse wildlife. It’s a self-sufficient race, so I’ll be carrying all my gear too. Everyone thinks I’m crazy for taking on such a huge challenge, but I remind people that I’ve been through a stroke and I can do this."

Jayne Huges, Community and Events Fundraising Manager at the Stroke Association, added: "With more than 100,000 strokes in the UK each year, it’s vital that we have people like Martin to help raise funds. We’re incredibly grateful to Martin for taking on this grueling challenge; he is a real inspiration and proof that there is life after stroke. The money raised will go a long way in helping to support people who are living with the effects of stroke and their families and carers, as well as helping to prevent people from having a stroke."

To sponsor Martin, please visit www.justgiving.com/jungleultra2017. For more information about stroke, ring the Helpline on 0303 30 33 100 or visit www.stroke.org.uk.