Up, up, and away: New University of Bristol balloon takes flight 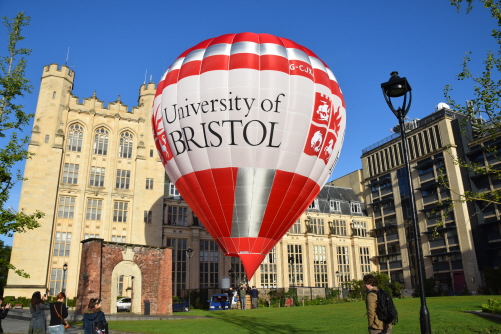 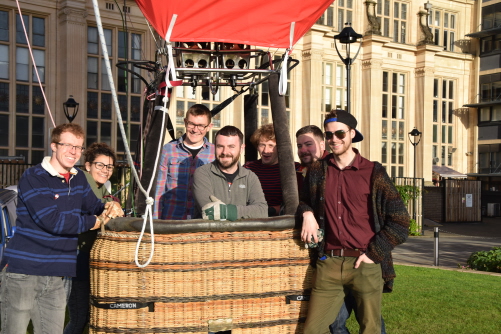 One of the University of Bristol’s most iconic sights – its hot air balloon – has had a makeover and took to the skies for the first time today [18 May].

In a city famed for ballooning, the University has continued its proud association with the ever-popular pastime by launching a new-look envelope.

It was created over 300 hours by Bristol-based Cameron Balloons and measures 22 metres tall by 18 metres wide. Around 1km of fabric and over 3km of thread were used to manufacture the envelope, which holds 105 cubic feet of hot air.

The new balloon will be flown throughout the year by the Bristol University Hot Air Balloon Society (BUHABS), which was established over 30 years ago.

This will be BUHABS' seventh balloon and replaces the current balloon which had been in use for 10 years.

Its President Jenny Chakravarty, an Engineering PhD student, said: "It's very exciting to have a new balloon. The old one was 10 years old so none of the members have flown a new one.

"Ballooning is such fun, especially during the Balloon Fiesta. I really love seeing everyone's reactions – all the children look up and wave. It’s really nice to see photos and know you’re part of that. We're always on the lookout for new members so would urge any interested students to get in touch."

The balloon is a Z-105 - with the Z describing the shape and the 105 indicating that it holds 105 thousand cubic feet of hot air.

The serial number is 12027. Cameron Balloons has built more than 7,000 hot air balloons over the last 46 years and this is the 7027th serial number allocated.

Ollie James, a trainee pilot who helped with the production of the new balloon said: "We felt it was important to have continuity and keep the red colour, but it's more forward-looking, especially with the flash of silver.

"Ballooning is unique in Bristol. When you're up there it’s quite magical – colourful and serene."

See a live video of the balloon taking off for the first time on our Facebook page: