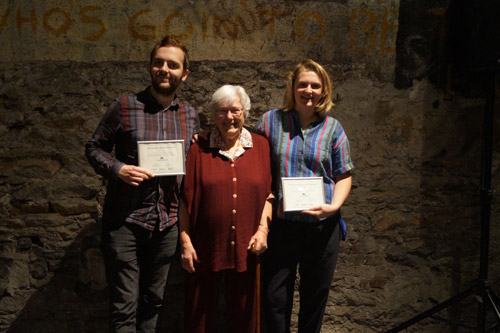 A University of Bristol student studying Theatre and Performance Studies has been presented with an award by the Bristol Old Vic Theatre acknowledging outstanding engagement with the University’s Theatre Collection.

The awards will entitle Isaac to two tickets for each Bristol Old Vic press night for a year.

He said: "From the very beginning of my studies at the University of Bristol, the Theatre Collection has been a vital tool in the construction of my work. From one of my very first case studies on Look Back in Anger, to my work on Chekhov, to acquiring books on Medieval theatre, the Collection has always been there to meet my needs.

"Ever since seeing the gloves that once belonged to Laurence Olivier when he played Archie Rice in The Entertainer on one of my first days here, I've been inspired by the living history the Theatre Collection can bring to students and public alike, and this is an experience I think should be shared with all who love theatre."

In 2015, long term supporter of the theatre, Geraldine Menez donated four of the original fifty silver tickets (including the ‘gold’ bearer ticket), dating from the opening of the theatre in 1766, and other archival material relating to the history of Bristol Old Vic to the University of Bristol Theatre Collection.

The material originally belonged to Geraldine’s great-grandfather, Henry Augustine Forse, who had rebuilt the facade of the Theatre in 1902. It was Henry’s passion for the theatre that led him to collect the silver tickets, plans and various other documents.

The fifty original silver tickets entitled the proprietor 'to the sight of every performance to be exhibited in this house' – a promise the theatre honours to this day. However, the use of the tickets and therefore the right of free admission is a quality ‘lost’ when added to any archive or museum collection.

In the original spirit of the tickets, and in honour of Geraldine's generous donation, and her great- grandfather’s in passion for Bristol Old Vic, two annual 'awards' were created.

These awards are called the Geraldine Menez Award and the Henry Augustine Forse Award.  In turn, the awards acknowledge an outstanding engagement with the University of Bristol Theatre Collection and an outstanding commitment to the Bristol Old Vic Engagement Department, and will entitle each recipient to ‘the sight of every press night performance’ for a year.

The second award, The Henry Augustine Forse Award 2017, was presented to Julia Head from the Bristol Old Vic Engagement Department in recognition of her outstanding commitment to the department.

Since moving to Bristol, Julia has become one of the most valued members of the Front of House, Box Office and Engagement Teams as well as a brilliant ensemble performer. She has performed in many Bristol Old Vic Young Company Productions (The Gigantic Beard That was Evil, A Thousand Seasons Past, St. Joan of the Stockyards and Under a Cardboard Sea) and completed the Made in Bristol Programme.

She is now becoming a director in her own right with Out of Sky and Beowulf under her belt, as well as extensive workshop delivery for Young Company and Engagement projects - she is developing a real style. She sees theatre as a catalyst and wants to make work that is political and changes people’s views.

The Theatre Collection is an accredited museum and one of the world’s largest archives of British theatre and Live Art.  Its holdings cover all aspects of theatre history right up to the present day, and its visitors include everyone from international scholars to family historians. It was founded in 1951 to serve the newly formed Drama Department (the first in any University) and remains a source of scholarly and creative inspiration