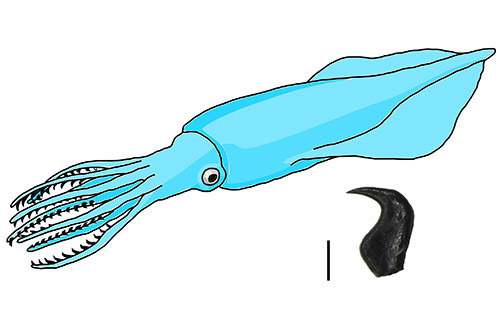 A hooklet from the tentacle of a belemnite, an ancient squid-like animal. The hooklet is only half a millimetre long, and the belemnite some 10 cm long. Emma Landon, University of Bristol

Sites around Bristol Parkway Station have produced an unexpected fossil haul – the first sea lily and squid remains from the British Triassic period.

The study, by Emma Landon, who was an undergraduate Earth Sciences student at the University of Bristol when she did the work, has been published today in Proceedings of the Geologists’ Association.

The Triassic is the geological time span from about 250 to 200 million years ago, and it comes immediately before the Jurassic.

For most of the Triassic time, the UK was part of a landmass that experienced hot climatic conditions. Then, some 205 million years ago, Europe was flooded by the sea, which spread over Germany and much of France and England.

This event, the Rhaetian Transgression, brought an end to the tropical, desert-like land conditions in Europe, a time when the dinosaurs originated.

Mike Benton, Professor of Vertebrate Palaeontology and Head of School of Biological Sciences at the University of Bristol, said: "Emma's find was surprising for two reasons.

"One of the bone beds she studied is considerably older than the main advance of the Rhaetian Transgression.

"It contained all the sharks and bony fishes seen in younger bone beds nearby, but also yielded tiny fossils of sea lilies (crinoids).

"One of the other bone beds, deposited during the Rhaetian Transgression, contained  ancient relatives of octopus and squid, in the form of small hooklets that used to line their tentacles."

Emma, who is now a PhD student at the University of Bristol, added: "When I started, I knew very little about the Rhaetian, but it was a dramatic time, when most of England was flooded.

"My discovery shows that there was an earlier, short-term flooding event in the south-west, maybe a few hundreds or thousands of years before the main flood."

Professor Benton added: "The finding of crinoid and octopus-squid fossils is new.

"We were ready for plenty of bones and teeth, and we had to be sure the crinoid fossils for example had not been washed in from older rocks. This was not the case, and they were clearly living at the time, in the Late Triassic."

Emma said: "I was excited to find the hooklets, as they have never been found in deposits of this age in Britain – so it was a wonderful discovery to make as part of my first foray into serious academic research."

‘The first discovery of crinoids and cephalopod hooklets in the British Triassic’ by E. Landon, C. Duffin, C. Hildebrandt, T. Davies, M. Simms, and M. Benton in Proceedings of the Geologists’ Association.