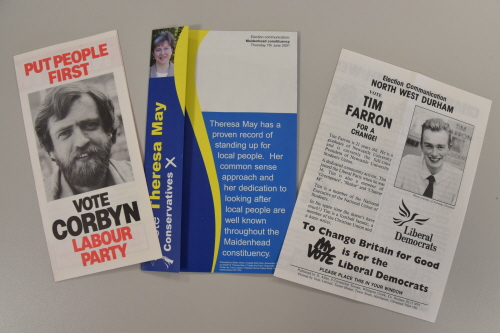 Labour leader Jeremy Corbyn’s first campaign in 1983 to become an MP in Islington North; Prime Minister Theresa May in a campaign leaflet for Maidenhead in 2001; and Tim Farron runs for the North West Durham constituency in 1992 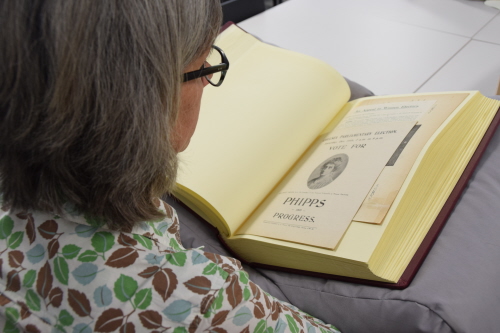 Hannah Lowery looks at an election flyer from 1918, the first time women ran for election

With the general election less than a month away, the campaign trail is hotting up and election literature is being produced thick and fast. An archive of election material, believed to be the biggest of its kind in the UK, is urging the public not to throw away any publicity, but to help capture Britain’s political history.

The University of Bristol’s Special Collections holds an extensive archive of over 30,000 election addresses for every British general election since 1892.

It’s looking for election addresses, manifestos, and related publicity from any constituency and party to help researchers in the future get a clear picture of how the general election of 2017 was fought, capturing which issues were of interest to the electorate and candidates.

The collection was originally established by the National Liberal Club and has been maintained by the University of Bristol since the 1970s.

Election addresses for many prominent Prime Ministers and Ministers are also among the leaflets, including Tony Blair's 1983 Sedgefield Election Address when he first became a Labour MP and David Cameron's 2010 Conservative Witney Election Address.

Prime Minister Theresa May features in a campaign leaflet for Maidenhead in 2001; there's a flyer from Jeremy Corbyn’s first campaign in 1983 to become an MP in Islington North – the seat he still holds; while a leaflet for the North West Durham constituency in 1992 shows a youthful-looking Tim Farron – who coincidentally ran against Theresa May for the seat, both losing out to the Labour candidate.

Hannah Lowery, archivist in Special Collections, said: "This is a fascinating collection of general election campaign materials. It's of great national and international importance, helping to shape our understanding of Britain’s political history. It covers all constituencies and parties, really capturing the issues of the time.

"With the public's assistance, we hope to collect a broad range of election addresses, manifestos and other publicity for the upcoming general election. We cover all 650 seats in England, Northern Ireland, Scotland and Wales so need help from far and wide. If you feel able to help, please do donate any election material you come across rather than throwing it away."

Please send election addresses, manifestos, and related publicity from any constituency and party (ideally in one batch) to:

Further information is available on the Special Collections website, or see their blog.