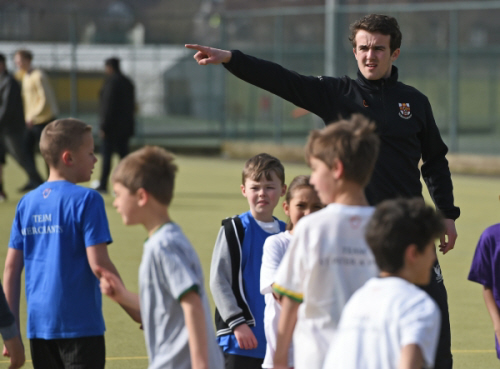 This week a record number of children from 11 local state primary schools are due to join more than 100 student volunteers from the University of Bristol.

The event on Tuesday [28 March] welcomes a jam-packed day of sporting activities, providing a brilliant platform to introduce the young pupils to activity which is outside of the normal school PE curriculum. This will also provide valuable insight into the sporting opportunities pupils can look forward to in their future education.

The University of Bristol’s student volunteers have been trained on the University's Sports Leadership Award, co-ordinated by Sport Development Officer Robbie Fox, from the department of Sport, Exercise and Health.

This nationally recognised qualification teaches and develops organisation, planning, communication and teamwork skills through the medium of sport.

This year has seen an unprecedented number of students wanting to get involved, which has allowed for almost double the number of children to take part in the festival, which was first started in 2008.

The volunteers, a diverse group of students from numerous countries and studying different courses, are looking forward to giving something back to the local community by putting on this event.

Current student intern Trinity Handley said: "In light of constant news and government reports on the poor health and low physical activity patterns of young children in Britain, being involved in the Festival of Sport is one of the best ways to show, by example, that exercise can be both fun and rewarding.

"I'm also looking forward to watching our female volunteers acting as role models to younger girls, as Sport England’s This Girl Can campaign has demonstrated the need for celebrating women in sport."