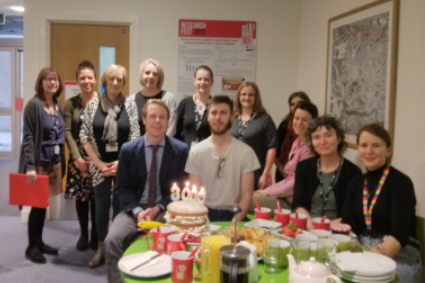 Alex (front centre), a film-maker and a PhD student at the University and ALSPAC's 3000th visitor

Dr Nic Timpson has recently been appointed to the post of ALSPAC Principal Investigator. He brings a distinguished academic pedigree and has made a long-term commitment to leading ALSPAC to ongoing success.

All the information collected at Focus@24+ is added to the enormous of data gathered since 1991, which has resulted in the publication of over 1,500 papers and shaped health policy in the UK and abroad.

Alex, a film-maker and a PhD student at the University, said: “It’s great to be part of a project that has such a positive impact on the health of others. And it’s just really nice to be part of a special group of people who’ve been doing their bit for science from birth onwards.”

Zoe from Weston super Mare, whose baby was the 500th baby to join COCO90s, said: “For me it is that buzz of excitement of being a part of the studies. Taking the time to contribute even just the smallest thing can make a big difference to someone else's life. It feels amazing – like an achievement – to give what I can and for my children to have the opportunity to take part too is excellent!”