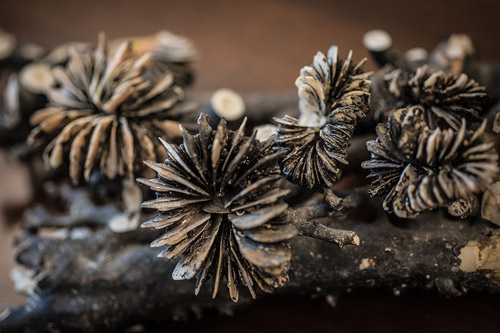 Fossil deep sea corals can be collected from the seafloor and brought back to the laboratory. They are commonly coated in black or brown metal rich crusts which develop once the coral has died.

We know a lot about how carbon dioxide (CO2) levels can drive climate change, but how about the way that climate change can cause fluctuations in CO2 levels?

New research from an international team of scientists, which includes the University of Bristol, reveals one of the mechanisms by which a colder climate was accompanied by depleted atmospheric CO2 during past ice ages.

The overall goal of the work is to better understand how and why the earth goes through periodic climate change, which could shed light on how man-made factors could affect the global climate.

Earth's average temperature has naturally fluctuated by about four to five degrees Celsius over the course of the past million years as the planet has cycled in and out of glacial periods.

During that time, the earth's atmospheric CO2 levels have also fluctuated between roughly 180 and 280 parts per million (ppm) every 100,000 years or so. In recent years, man-made carbon emissions have boosted that concentration up to over 400 ppm.

Using a library of deep-sea corals the researchers have shown that periods of colder climates are associated with higher phytoplankton efficiency and a reduction in nutrients in the surface of the Southern.

They have also shown that this is related to an increase removal of carbon sequestration from the atmosphere and into the deep ocean.

Their findings have been published this week in the online edition of the Proceedings of the National Academy of Sciences.

Biological processes are the main driver of CO2 absorption from the atmosphere to the ocean. Just like photosynthesising trees and plants on land, plankton at the surface of the sea turn CO2 into sugars that are eventually consumed by other creatures.

When these creatures die, they sink to the deep ocean, where the carbon is locked away from the atmosphere for a long time. This process is called the "biological pump."

A healthy population of phytoplankton helps lock away carbon from the atmosphere. In order to thrive, phytoplankton need nutrients—notably, nitrogen, phosphorus, and iron. In most parts of the modern ocean, phytoplankton deplete all of the available nutrients in the surface ocean, and the biological pump operates at maximum efficiency.

However, in the modern Southern Ocean, there is a limited amount of iron—which means that there are not enough phytoplankton to fully consume the nitrogen and phosphorus in the surface waters. When there is less living biomass, there is also less that can die and sink to the bottom—which results in a decrease in carbon sequestration. The biological pump is not currently operating as efficiently as it theoretically could.

To track the efficiency of the biological pump in the past, the research team collected coral samples from the Southern Ocean.

As it grows, coral accretes a skeleton around itself, precipitating calcium carbonate (CaCO3) and other trace elements (including nitrogen) out of the water around it - creating a record of the chemistry of the ocean.  These corals Secondly, coral can be precisely dated using uranium dating.

Professor Laura Robinson from the University of Bristol’s School of Earth Sciences led two expeditions to the relatively narrow (500-mile) gap known as the Drake Passage between South America and Antarctica.

She said: "I started this research project by using one or two samples from museum collections –it was only in 2008 that we were first able to take a ship out to sea and start to collect samples from the most important sites. We were able to collect the skeletons of many deep-sea corals – so the challenge on return was to figure out the age of each sample."

The study required extensive efforts to establish the age of the corals, a specialty of the Bristol Isotope Group.

To investigate the nutrient cycling the content and type of nitrogen was analysed. When there is more of the rare form of nitrogen (with a mass of 15 (N15)) the biological pump is more efficient.

The study found that higher amounts of 15N were present in fossils corresponding to the last ice age, indicating that the biological pump was operating more efficiently during that time.

The Bristol team is now pushing forward new ways to use deep-sea corals to explore the history of the ocean – through development of new methods as well as new ways to establish the timing of past events.